Second-hand clothing for developing countries - a blessing or a curse?

Donating for charity - that's what most Germans think they're doing when they drop used clothing into a collection bin. But their donations are a lucrative business that even affects developing countries. 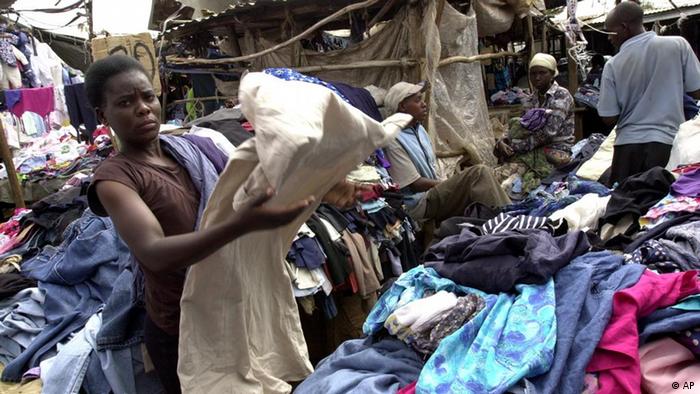 Bags of used jeans, t-shirts, dresses and shirts: Germans are generous when clearing out their closets to donate for charity.

Too generous, perhaps - charitable organisations in Germany meanwhile receive far more clothing than they can pass on to people in need. As a result, respected aid organisations like the Red Cross allow the use of their name and logo to collectors who have a purely commercial agenda.

The used clothes are sorted and then sold, depending on quality, as raw materials to be recycled or as second-hand merchandise. Collecting, sorting and transporting the clothing costs money so in principle, you can't object to its sale, according to Andreas Voget, manager of FairWertung, a federation of charitable and church-associated organisations advocating more transparency and responsibility in second-hand clothing drives.

"Often people even want to pay for used clothes. That's a question of dignity not only here, but in Africa, too," he told DW. He said people are prepared to spend a small part of their limited budget in order to have a say about how they dress and so they can choose good quality clothing. 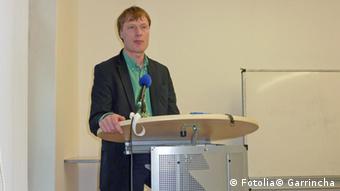 A good price, good value and a good selection: that is why Africans buy clothing imported from Europe or North America.

Neither locally-produced textiles nor clothing imported from China can compete. In many African countries, an estimated 60 to 80 percent of clothing is bought second-hand. Of course, that's a good thing because people don't need much money to purchase niche clothing. It also shows, according to Voget, that "due to poverty, the worldwide demand for second-hand clothing is on the rise."

Critics say imports of used clothing are to blame for the demise of local textile production in many African countries.

According to a study, the demise of local textile production in the 1980s and '90s can be attributed to about 50 percent to imported second-hand clothes, Friedel Hütz-Adams of the NGO Südwind said. "All of it was originally donated to help the needy." Poor production conditions in the respective countries play a role too, he said.

African nations have lost their potential to develop because of the demise of their local industries, Hütz-Adams warned. Nigeria, South Africa and Ethiopia appear to agree; accordingly, they have banned imports of second-hand clothes. Ghana, Tanzania, Uganda and Rwanda are currently debating restrictions on imports in hopes that will give local textile manufacturers better prospects for the future.

Critics like Andreas Voget, however, believe limiting imports of used textiles isn't necessarily the solution to the problem. "They're pretending that, if it weren't for imported western second-hand clothes, these African nations would produce thriving textile industries," Voget said. "That's a delusion that has nothing to do with reality."

Most African states that import used clothes don't even consider the pros and cons since it offers people with little money an opportunity to buy inexpensive clothing. African importers simply buy second-hand clothing in Europe, the US or Asia because demand at home is high.

But many a local textile manufacturer has also found his niche, Voget added: local producers sell their clothes to wealthier customers or export clothing "made in Africa" to Europe and the US. 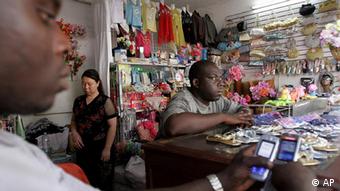 Fashion "Made in China" for Africa

Like many African states, the German government refuses to restrict second-hand clothes exports. Such exports, Berlin said, are only partly to blame for the demise of local textile manufacturing; other factors include poor economic conditions in the respective countries, low productivity, state intervention and the distortion of competition, for instance slapping higher customs duties on raw textile materials than on finished products.

On a positive note, the second-hand clothes business has also created job opportunities: often, clothing from Europe or the US must be altered to fit Africans.

The question remains, however: does the money earned with the brisk trade in second-hand clothing benefit the people the charitable donation was intended for in the first place?

Used clothing is a lucrative business: in Germany, a ton of second-hand clothes sellsfor an average of 300 euros. The labor- and time-intensive sorting process lets the price skyrocket, according to Südwind's Hütz-Adams: "Exports to African markets cost up to 1000 or even 1500 euros per ton, depending on the quality and country of destination."

Experts in Germany do agree on one matter, however: Would-be donors have to be told that nowadays, used clothing is a business - no more, no less.

UN countries have committed themselves to halve extreme poverty by 2015, and new World Bank figures suggest that they are on course. But critics are more cautious. (17.03.2012)

Africa's extended family structure, long admired by many, is changing. In the central African country of Cameroon, old people who used to be venerated as a source of wisdom are being left to live alone in poverty. (06.03.2012)

Elements of education for sustainability include raising awareness and spreading information about the consequences of climate change, human rights and how the world market operates. Who is responsible for doing that? (03.03.2012)