Hundreds of rescue workers have been searching for victims of a landslide in central Sri Lanka that is thought to have claimed more than 100 lives. More than 150 houses were washed away in the disaster. 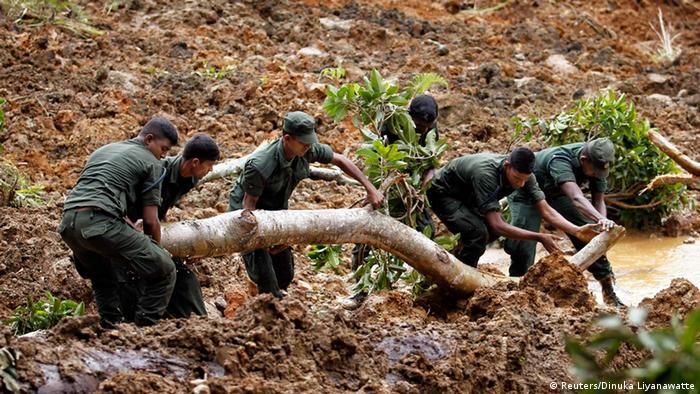 Some 500 soldiers and volunteers on Thursday resumed their search for victims of a landslide in central Sri Lanka that is feared to have buried more than 100 people alive, officials said.

A military spokesman, Brigadier Jayanath Jayaweera, said bad weather conditions and the risk of further landslides in the region were making operations difficult.

Initial estimates put the toll from the landslide at 300, but the Disaster Management Centre later revised this down, saying many people had not been at home when the disaster struck on Wednesday morning.

The Centre said the landslide buried 150 houses in the tea-plantation village of Koslanda, 190 km (120 miles) from the capital, Colombo. Some 3.5 kilometers of land were estimated to have been washed away.

More than 300 survivors spent the night in nearby schools.

The Sri Lankan government says residents in the village had been advised over the past nine years to leave the area, but that many had not heeded the warning. Some estate workers say this was because the alternative accommodation offered was too far away from the tea plantations where they worked.

If the death toll does reach 100, the disaster would be the worst in the country since the December 2004 Asian tsunami, which killed around 31,000 Sri Lankans.

Sri Lanka has already been hit this year by numerous landslides since the onset of heavy monsoon rains in mid-September. They have caused damage to roads, but up to now there had been no casualties.