A graffiti project on an old Scottish castle has become more popular than expected. Should it be removed for the sake of preserving the historic building? 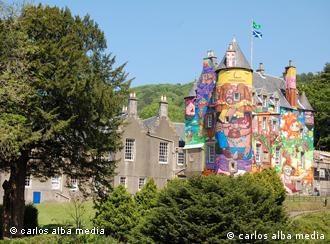 Kelburn Castle is just like hundreds of other old Scottish castles with its quaint turrets, grand estate and earl-in-residence - except that one of its outer walls displays a bright psychedelic graffiti mural which has reignited the debate over how Europeans preserve their old buildings.

The Earl of Glasgow, whose family has occupied the castle for the last 800 years, invited four Brazilian graffiti artists to create a work of art on one of the walls in 2007 as a temporary measure. The so-called Graffiti Project involved 1,500 cans of spray paint to decorate the 13th-century castle. It put Kelburn Castle, which lies near the seaside town of Largs on Scotland's west coast, into the top 10 worldwide examples of street art - on the same list as Banksy's work in Los Angeles and Rio de Janeiro's Favela Morro da Providencia.

The mural has become a huge draw for visitors, but its agreed three-year tenure is now over. Now Kelburn Castle's earl, Patrick Boyle, has written to Historic Scotland, the government body that advises the country's planning departments on buildings of historic significance, to plead for the art to remain on the building.

The 72-year-old explained it was his son, David, and daughter, Alice, who got to know the Brazilian graffiti artists. "They came to me and suggested the idea and I was quite apprehensive about this to begin with," the Earl of Glasgow said. "We were intending to take all the rendering off the castle walls and have it re-rendered and so we thought it was the perfect time to have this great mural painted on the side of the castle." 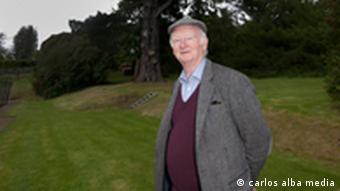 Historic Scotland had granted its permission based on the three-year time limit.

But the work by the Brazilian team - twin brothers Otavio and Gustavo Pandolfo, known as Os Gemos, together with Nina Pandolfo and Francesca Nunca - is becoming a famous piece of art.

"It struck me, if it is one of the most important pieces of street art in the world, it seemed to be crazy just to tear the thing down," the Earl of Glasgow explained. "So I've written to Historic Scotland to ask if we can keep it, not permanently, but at least indefinitely."

A spokesperson for Historic Scotland said the matter was in the hands of the local authority, North Ayrshire Council, and they are happy to advise the body. "The artwork is a celebration of Kelburn Castle's importance as a historic building and we are pleased that it has received this recognition," said the spokesperson.

But a spokeswoman for North Ayrshire Council, who will have the final say on the Graffiti Project, said that there were no plans to enforce the removal of the art while talks are taking place. "Positive and productive discussions are ongoing between the council and the owner of Kelburn Castle regarding plans for a raft of improvements," she commented.

Neil Baxter, secretary and treasurer of the Royal Incorporation of Architects in Scotland (RIAS), says Scots take their historic treasures seriously, but believes the right balance must be struck when dealing with old buildings such as Kelburn Castle.

"The graffiti's a bit of thumbing of the nose at the conservationists who are terribly precious about our environment, and that's always good fun but you don't want to cause the building permanent damage," he said. If the building is fine and stable, there is no harm to it, then fine - paint it bright pink."

Buildings shouldn't be considered museum pieces, he added, but should continue to contribute to society: "Buildings are useless if they are not alive."

Baxter says Scotland was in the vanguard of listing and protecting but due to the huge number of grand old buildings it comes down to a question of economics. "Scotland has the will but there is a shortfall in the money," he explained, adding that "the German church tax is a brilliant idea - allowing people to opt into a historic building's special support tax."

In Germany, taxpayers can voluntarily contribute to one of the state-recognized denominations; just a portion of those funds go to the upkeep of historical church buildings. 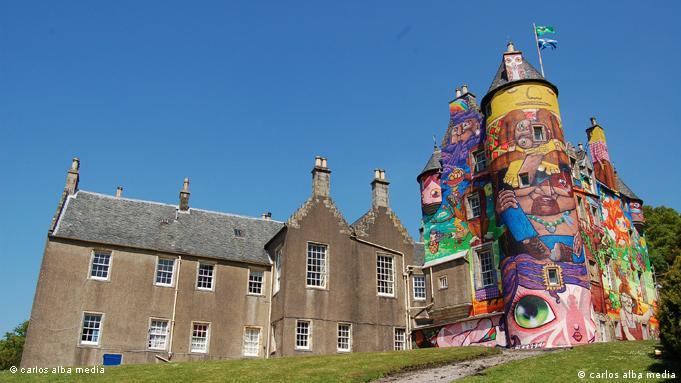 It took 1,500 cans of spray paint to decorate the castle

Scotland is no stranger to architectural controversy. There was public outcry when the new parliament building in Edinburgh was completed in 2004, three years late and 10 times over budget at 414 million pounds (473 million euros, $668 million). But the real talking point was its futuristic design by the late Catalan architect, Enric Miralles, which attracted much criticism. One architecture magazine described it as "an indecipherable jumble of forms."

The country's best known architect, Charles Rennie Mackintosh (1868-1928), left his home city of Glasgow with a rich legacy. Plans to knock down the buildings which face his masterpiece, Glasgow School of Art, sparked a fierce international debate when they were announced last year.

The world famous art school building - which was voted architects' favorite building of the past 200 years and the UK's favorite building of the last 175 years - is set to be complemented with a sleek modern structure designed by New York-based Steven Holl Architects working with Scottish-based JM Architects. They were selected from 150 entries to create the 50-million-pound project.

Professor Seona Reid, director of Glasgow School of Art, said a "rigorous process had informed every aspect of the commissioning and development process," which included the choice of materials, manipulation of light and its relationship with the facing art school building. Meanwhile, leading architectural historian William J R Curtis heaped criticism on the project in The Architects' Journal, citing its "dominating stance and bulky proportions" which could overpower the art school.

The clash of old and new

However, the debate over how to marry old with modern, and whether buildings should replicate their surroundings is not new. When the glass and metal futuristic structure of the Louvre Pyramid was unveiled in the Louvre Palace courtyard in Paris in 1989, it sparked controversy with traditionalists.

And in Germany's capital, debate is still ongoing over the planned rebuilding of Berlin Palace on the vacant site which the original grand building once occupied. Currently the plans are on hold until 2014 due to the economic conditions, but questions remain over whether this is the best plan for the prominent site.

Baxter feels it is better to transform old buildings with modern designs "to bring them alive." But he also believes that not all old structures can or should be saved.

"You have to look at ways of adapting buildings that keep faith with their historical importance," he said. "But you also have to accept that, on some occasions, some historic buildings have to be lost."

This summer, thousands of tourists will head to Europe's most famous architectural mistake: the Leaning Tower of Pisa. After more than 800 years, the tower still leans - but now it's cleaner and more stable than ever. (28.06.2011)

'Graffiti is not what you think it is,' say two Cologne street artists

Cologne is one of the German cities that is famous, or infamous, for its graffiti. Deutsche Welle tracked down two sprayers active in the Cologne scene who argue against claims that graffiti is mere wanton destruction. (22.01.2011)