Scores of policemen killed in Democratic Republic of Congo

Forty-two police officers have been decapitated by a Congolese militia group after the officers' vehicles were ambushed. The country's Kasai region has seen seven months of severe violence amid local power struggles. 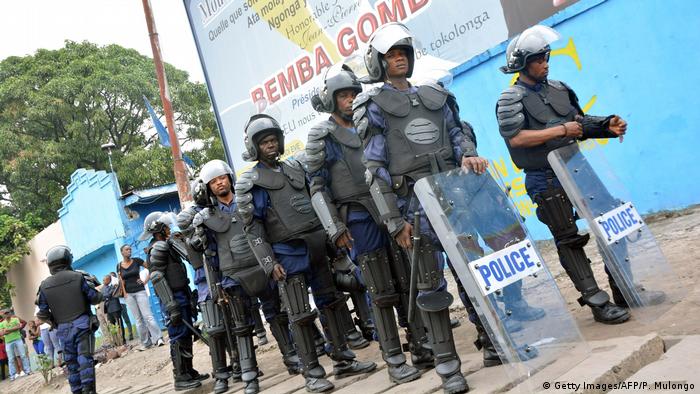 Members of the Kamwena Nsapu militia were behind the attack on a convoy of two police trucks in the DRC's Kasia Central province, a local official said.

The attack between the cities of Tshikapa and Kananga occurred on Friday, according to Kasai Assembly President Francois Kalamba.

Local reports said many of the officers were decapitated and others were shot dead.

Six policemen were released because they spoke the local Tshiluba language, he said.

The militia fighters, who are often armed with machetes but rarely carry firearms, made off with weapons and vehicles during the raid, Kalamba added.

Hundreds have been killed and about 200,000 displaced since fighting between the Kamwena Nsapu and government forces started in Kasai province in August 2016.

The insurgency, which has spread to five provinces, poses the most serious threat yet to the rule of President Joseph Kabila, whose failure to step down at the end of his constitutional mandate in December was followed by a wave of killings and lawlessness across the vast central African nation.

Friday's attack follows government reports of a wave of surrenders by fighters in neighboring Kasai-Central province in recent days. The Interior Ministry said on Saturday that 400 fighters had surrendered this week in the province.

Last week, two United Nations officials - one US citizen and the other of Swedish nationality- and four Congolese accompanying them were also kidnapped last week by unknown assailants in Kasai-Central. They have yet to be located.

An estimated 25 people, mostly Hutus, have been hacked to death with machetes by militiamen from the Nande ethnic group in eastern Democratic Republic of Congo. They were reportedly beheaded by the attackers. (19.02.2017)