Although the US-led Iraq war no longer plays a prominent role in German political debate, there are indications that Chancellor Gerhard Schröder may recycle the issue that brought him victory in 2002. 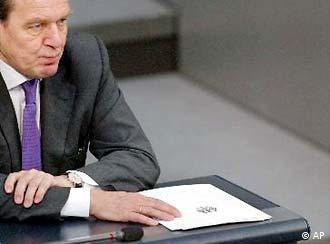 The Iraq war was one of the most important, if not the defining, campaign issue during the 2002 German elections. Gerhard Schröder won re-election largely because he reflected the German public opinion at the time by loudly opposing the build-up to war in Iraq and criticizing the United States for planning an invasion.

The 2005 election is bound to be quite different. Even though Iraq remained a hot-button issue in the British, Spanish and US elections over the past year and a half, these days Germans are mostly preoccupied with domestic issues, most notably the unemployment rate, which has reached post-war highs under Schröder's government.

The continuing violence in Iraq and recent terrorist attacks in London, however, may be presenting a window of opportunity for Schröder to wave his pacifist flag again.

"You can't expect the Chancellor to ignore the issue that got him elected last time around," a senior advisor to Schröder said last week.

The Social Democrats have stressed in their election program that if it had been up to the opposition Christian Democrats, German troops would be in Iraq today. 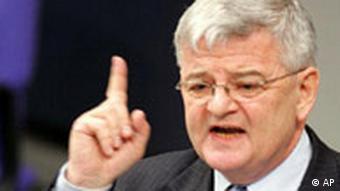 Proud of his achievements: Joschka Fischer

Joschka Fischer, German foreign minister, made a similar connection during an impassioned July 1 speech in the parliament, when he cited Germany's refusal to participate in the Iraq war as one of the "reasons to be proud of what we have achieved."

The importance of the domestic agenda, however, has increased the chances of Angela Merkel becoming Germany's first woman chancellor. The latest opinion poll gave her conservative Christian Union bloc a clear lead of 17 percentage points. 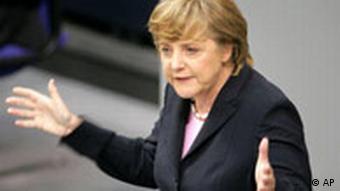 Merkel is promising to slash Germany's unemployment rate and inject new life into the euro zone's biggest, but stagnating, economy. Merkel has unveiled plans to create jobs and raise the value-added tax, a form of sales tax common throughout the European Union, to 18 percent from 16 percent today.

On the question of Iraq, Merkel has attempted to balance her support for the US intervention with an unwillingness to send German troops to Iraq. Recently, however, she has been increasingly vociferous about criticizing the Social Democrats for hurting US - German relations.

"I do get the impression that Schröder and the SPD are trying to make the old Iraq debate an election issue again," said Wolfgang Schäuble, a foreign policy expert for the CDU.

"That is above all a sign they are desperate and lack good, forward-looking arguments for why people should vote for them," he said.

According to Manfred Güllner, director of the Forsa polling institute, it would be, indeed, very difficult for Schröder to play the Iraq card again.

"He will try to present his Iraq policy as one of his accomplishments, but I don't believe it will be a big plus this time," Güllner told Reuters.

"The war has already happened. It simply isn't the divisive issue it once was."

DW-WORLD looks at the constitutional aspects of the early elections that have led some to cry foul and others to praise the county's electoral system.

Germany United in Praise for Iraq

Germany's political parties all praised the millions of Iraqis who braved threats of violence to vote in Sunday's election. Chancellor Gerhard Schröder spoke of an encouraging sign for the country. (Jan. 31, 2005)

German President Horst Köhler will announce late Thursday whether he will dissolve parliament to pave the way for an early general election this fall after Chancellor Gerhard Schröder purposely lost a confidence vote. (July 21, 2005)