With an impassive face, German Chancellor Gerhard Schröder received the news that the vote of confidence in the Bundestag ended just as he hoped -- in failure. 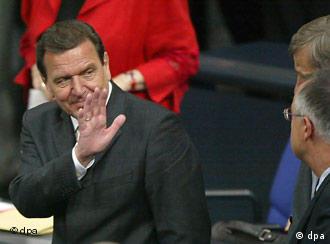 Will it be bye-bye Schröder?

Schröder's strategy of deliberately losing Friday's vote of confidence in the German Bundestag in order to force early elections paid off, with 151 parliamentarians voting in support of his government, 296 voting against, and 148 abstentions.

Schröder needed a majority of 301 votes to win the motion.

The chancellor is now free to ask German President Horst Köhler to dissolve parliament and call a general election.

Köhler has three weeks in which to decide whether or not he will comply, meaning that the fate of the current SPD-Greens coalition is now largely in the president's hands. During that time, the government will be in limbo, awaiting his decision.

Even if Köhler were to decide to dissolve parliament, that move could later be overturned by the Constitutional Court.

Green parliamentarian Werner Schulz has already announced his intention to turn to the court if parliament is dissolved. He said he was convinced that Friday's confidence vote was a farce.

Interior Minister Otto Schily defended the vote as constitutional, adding that Schröder's course of action was "courageous, fair and confident." 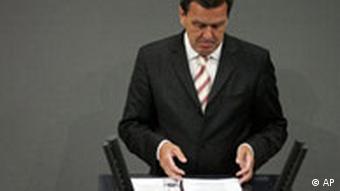 Schröder orchestrated Friday's defeat to keep alive his strategy of holding early elections as soon as this September. In his speech prior to the vote, he said he needed a fresh mandate if he was to continue with his controversial package of reforms known as Agenda 2010.

"Schröder demonstrated in his speech that there is enough justification to dissolve parliament," Gero Neugebauer, a political scientist at Berlin's Free University, told Reuters. "He cleverly included President Köhler into the circle of those responsible by pointing out that new elections are very much the will of the people. He put the pressure on Köhler to approve it."

According to pollsters, Schröder is playing with fire. An early run-off against the conservative candidate for chancellor, Angela Merkel, could see an end to Schröder's seven-year tenure.

Schröder's party trails the opposition Christian Democrats (CDU) heavily in opinion polls. Support for his Social Democrats (SPD) is also being siphoned off by a new leftist alliance made up in part by dissenting ex-SPD members.

Hoping to trigger new elections, German Chancellor Gerhard Schröder is expected to deliberately fail a vote of confidence in parliament Friday. DW-WORLD looks at the record of his red-green coalition government so far. (July 1, 2005)

German Chancellor Gerhard Schröder called on parliament to pave the way for early elections as he opened a debate in a no confidence motion he is hoping to lose. (July 1, 2005)

After his Social Democratic Party suffered defeat in state elections in North Rhine-Westphalia on May 22, German Chancellor Gerhard Schröder announced he wanted early elections to put his reform course before voters.