Schröder Isolated in China Stance | Europe| News and current affairs from around the continent | DW | 15.04.2005

As EU foreign ministers meet Friday to discuss the possibility of lifting a 16-year-old arms embargo on China by June, Germany's Gerhard Schröder finds himself out on a limb in his staunch defense of the plan. 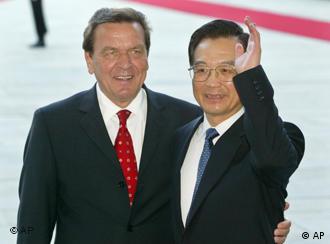 Chancellor Gerhard Schröder was largely isolated in the Bundestag Thursday, when he once again came out in favor of ending the EU embargo, arguing that Beijing has changed since the Tiananman crackdown and that the sales would help boost trade ties with China, the second-biggest EU trading partner.

"With our policy towards China, we should pursue a long-term relationship with China in all areas, including security policy," he argued. "Sanctions are designed to isolate and punish. The German government wants to develop cooperation, which can bring about change."

But there was plenty of resistance to the Chancellor's proposal. Conservative opposition leader Angela Merkel said she doubted that ending the embargo would speed up democratization in China, while the SPD's junior coalition partner, the Greens, were equally reserved.

"At this point in time, (we) do not support lifting the weapons' embargo against China," said the Greens' foreign policy spokesman Fritz Kuhn said. 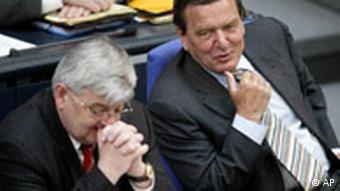 Green foreign minister Joschka Fischer, meanwhile, said he was obliged by EU policy to work towards a consensus on the issue. But he said China also had to do more.

"I'm appealing here to the Chinese government and the People's Congress to ratify the Human Rights treaties," he said. "That would send out a positive signal."

The arms embargo is one issue on which the Chancellor and his foreign minister have yet to find a common voice.

France and Germany have led the push to lift the "outdated" EU arms embargo, rejecting criticism that they are ignoring serious concerns to curry favour with the emerging Chinese economic giant.

But Wolfgang Schäuble, vice chairman of the Christian Democratic Union, stressed that lifting the ban needed to be discussed with the US. And Washington is still firmly opposed to the move.

For now, at the urging of the United States, the European Union looks set to agree to keeping the embargo.

But questions over the 25-member bloc's plans to end the China arms ban, in place since the 1989 Tiananmen Square massacre, seem certain to fuel intense debate at the meeting of EU foreign ministers in Luxembourg Friday.

Despite fierce opposition notably from the US and Japan, EU leaders last December asked their foreign ministers to work towards lifting the ban by this June, when Luxembourg hands over the EU presidency to Britain.

The balance of power

But the issue has been complicated by China's adoption last month of an anti-secession law which authorizes the use of force against Taiwan if the island moves towards full independence.

Washington has warned that an end to the EU ban would upset the balance of power between Beijing and Taipei.

If an EU decision is not taken by June -- an increasingly likely scenario -- the issue could be left in limbo until 2006 after the end of Britain's six-month presidency of the EU starting on July 1.

No decisions are expected from the Luxembourg meeting, not least because of the absence of British Foreign Secretary Jack Straw, who is unable to attend the meeting in Luxembourg on account of an election campaign at home. 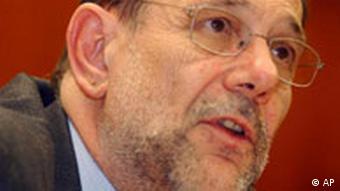 A spokeswoman for EU foreign policy chief Javier Solana (photo) said ahead of the talks that, while the EU still plans to lift the ban, the anti-secession law and other issues had "had an impact."

"It could affect the time line" of when the ban is lifted, she said.

The EU also insists it will put in beef up its own code of conduct on arms sales, while also pushing for China to make a gesture on human right in exchange for lifting the ban.

But on top of the anti-secession law, tensions between China and Japan have flared up recently in disputes over their shared wartime past and Tokyo's decision to allow drilling for gas and oil in disputed waters.

"The situation now between China and Japan is not contributing" to efforts to make a decision on lifting the embargo, an EU diplomat said.

US, EU on Collision Course Over China

Two senior members of the United States Congress warned the European Union this week that the lifting of the 15-year arms embargo on China could result in a halt of US sales in military technology to the EU. (March 3, 2005)

While France and Germany lead a group of EU countries intent on ending the arms embargo on China, some are becoming nervous due to Chinese moves against Taiwan and increasing US pressure. (March 21, 2005)