Scholarship in honor of Neda draws criticism from Iran | Europe | News and current affairs from around the continent | DW | 12.11.2009

Scholarship in honor of Neda draws criticism from Iran

Oxford University has created a scholarship in the name of Neda, an Iranian student who died during election protests in June. The move has drawn condemnation from Tehran. 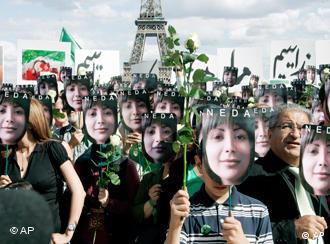 Neda's death did not go unnoticed in Europe

Iran has condemned England's Oxford University for creating a scholarship in honor of Neda Agha-Soltan, a 27-year-old philosophy student who was shot and killed over the summer during election protests in Iran.

She became a symbol of the protests when her death was captured on video and viewed by millions on the Internet.

In a letter sent to Oxford from the Iranian Embassy in London, Iran called the scholarship a "politically motivated move." The Iranian government has repeatedly claimed that Agha-Soltan's death was staged by enemies of the state.

"The college is keen to support graduate students," said Professor Paul Madden, Provost of Queen's College. The scholarship will help Iranian students to study at Oxford, regardless of their financial background.

He added: "donors make their own decisions, within reason, on how to name scholarships that they fund. In this case, the donor who was instrumental in establishing the scholarship is a British citizen and is well known to the college."

The name of the donor has not been released.

Iranian police have used tear gas to break up a rally by opposition supporters in central Tehran. The clashes come as Iran marks the 30th anniversary of the student storming of the US embassy in the capital. (04.11.2009)

Iran accused of spying on dissidents in Germany

Iran's government is notorious for cracking down on political opposition in its own country. New media reports suggest that Iran has extended these operations and is now also going after dissidents who live abroad. (16.10.2009)

Iranian filmmaker Narges Kalhor has applied for asylum in Germany after her visit to a film festival. The move is likely to ruffle feathers in Tehran, as her father is the media advisor to President Mahmoud Ahmadinejad. (14.10.2009)