In a speech to the European Parliament, France's president looked back on his country's six-month term heading the EU. MEPs debated with the leader on topics including Georgia, the financial crisis and climate change. 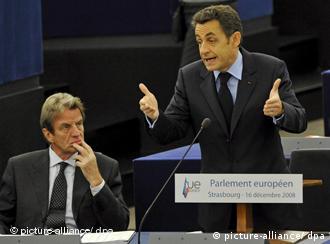 France's president Nicolas Sarkozy said his country had aimed to organize its six-month presidency on the basis of two convictions.

"The world needs a strong Europe and that Europe cannot be strong if it is not united," Sarkozy told the European Parliament in Strasbourg on Tuesday, Dec. 16. A strong Europe was one that "rejects consensus based on pushing problems to one side," he said.

Sarkozy said France's presidency had been forced to follow "the rhythm of international events," among them the Russia-Georgia conflict in August and the worldwide financial crisis in September. Though he had tried to change Europe in this time, Europe had in fact changed him, he said.

"I really think that each head of state or government would benefit at some time from this responsibility," Sarkozy said. "They would understand that whatever differences we have, there are so many things that bring us together. When one has the chance over six months to learn about and to solve the problems of 27 nations, one gains tolerance, an opening of the spirit and one understands Europe." 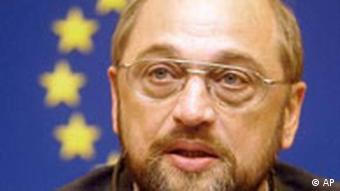 Schulz said the French presidency had been "quite good" overall

Most MEPs applauded France on its term. Even the Socialist leader in the European Parliament, Martin Schulz, an outspoken critic of Sarkozy's, called the French EU presidency a success.

"If the next presidency does the same I would be happy," said Schulz. He said the French leader had "come out of the closet, as a pro-European."

The Czech Republic will take over the EU's rotating presidency on January 1, 2009.

Sarkozy defended the EU's climate change deal, which the bloc agreed on last week. He told the parliament that there had been "an enormous fight" about climate change and energy as each member state had had "reason for dissatisfaction." He said compromises that had been agreed by leaders would avoid imposing unbearable sacrifices on its citizens.

"We didn't want to impose constrictions which no country in the world could have survived socially," Sarkozy said.

The president of the European Commission Jose Manuel Barroso said the climate change initiatives made Europe the first to accept legally binding rules by 2020.

"And we will be strengthening these limits as agreement is reached globally," Barroso said. "We can now turn to our friends in America and say to them: Yes, you can!"

The conservative leader Joseph Daul said the climate change agreement would protect both the environment and jobs. He said the EU now had to lead the worldwide fight against climate change, press the worst polluters to act and seek tangible commitments from US President Barack Obama once he took office.

But Daniel Cohn-Bendit from the Greens called the swift adoption of the climate change package "blackmail."

European lawmakers will be voting on the climate change package on Wednesday. The parliament's main political groups have already announced that they will be supporting the deal.

Most MEPs applauded France's rapid reaction to the economic and financial crises. Socialist leader Schulz said the Presidency "did well" on the financial crisis. Sarkozy had reacted -- albeit "somewhat late" -- to the time-bomb of social imbalances in Europe, Schulz said.

Sarkozy said unity had been crucial in the global financial crisis. If Europe's countries and institutions had not taken responsibility, this would have led to "the destruction of the European banking system," he said.

"We in Europe want entrepreneurial capitalism not speculative capitalism," Sarkozy said. "We have said this with one voice. Our economies and our political cultures are not the same, but we all agreed in the end."

The Presidency's actions had brought about coordinated protection for savers' deposits and recapitalization for banks, he said. This had prevented a chain reaction in which thousands of jobs could have been lost, Daul said.

Europe is not the enemy of the nations

Many parliamentary group leaders welcomed Sarkozy's and the French government's swift and successful reaction to events in Georgia. Sarkozy said his main aim during the Georgian crisis had been "to stop the war and not fall into the same trap as in Bosnia," where the United States had taken the lead and Europe followed.

It had been a "real obsession" of France's presidency that Europe should "take responsibility" over Georgia and fortunately Europe had remained united over the issue, he said.

Sarkozy said in his conclusion that Europe required an understanding between different nations. He said that he was not an integrationist, but that he was determined to preserve the nation state.

The Czech Republic takes over the European Union presidency on Jan. 1 from current holder France. Czech Foreign Minister Karel Schwarzenberg spoke with DW about his country's intentions for its EU presidency. (16.12.2008)