The month of July officially marks the end of the mourning period for genocide victims in Rwanda. Between April - July, different activities are held countrywide to remember victims. 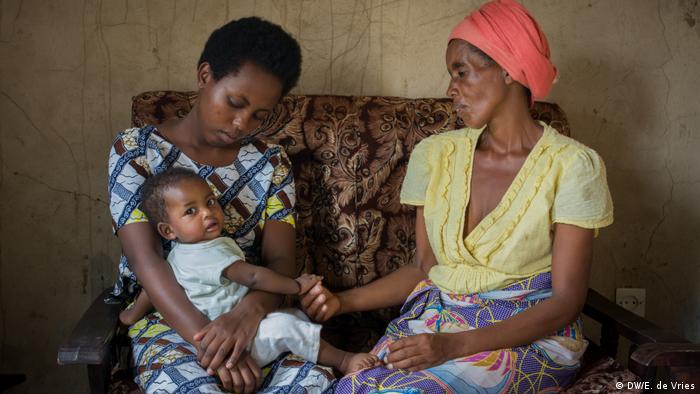 For 100 days, from April 7- July 4, Hutu militias went on a killing spree of Tutsis. It was not until the rebels led by current president Paul Kagame stopped the genocide. A quick estimate by aid organizations put the number of victims at 800,000 but official figures say more than a million Tutsi were killed a figure that was approved by UN Security Council resolution 2150. Twenty-five years on, genocide widows are yet to come to terms with the tragedy that claimed their husbands. Some have chosen to remain single and take care of their children. But in a country that has pushed for unity and reconciliation, why has it not been easy for the widows to deal with the loss of their husbands? Many want perpetrators to meet with them face to face and apologize rather than the government to push them to forgive. DW's Isaac Mugabi spoke to Chantal Umuhoza, a feminist and activist. She is also the Executive Director of SPECTRA, an organization of young feminists that among others, supports widows.

DW: How can you describe the healing process of the genocide widows?

Umuhoza: I can say it has been a long process of recovery for most of them. And of course, they're different depending on how they were affected. Every woman has a story to tell. And with each story, there's a way how each one has a journey to recover from what they experienced. I have participated in projects involving these. So we have interacted. But also beyond that, I have women in my family who are widows due to the genocide. So I have first-hand information and experience looking at how they've been trained to deal with life after the genocide.

Some of the women I spoke to are still waiting for the killers of their husbands to come forward and say sorry. Do you think this can help them overcome the trauma?

I think for most of them, especially the ones that I've interacted with forgiveness is the only option they have. It is one way to have a peace of their mind and focus on other things. But for some, the choice of forgiveness also has been facilitated where the perpetrators were able to approach them and apologize, especially, that they were neighbors and explain why they perceived them as enemies during the genocide. Many things facilitate one's recovery; one of them is meeting with perpetrators.

Do you think the government has done enough to support them because on scrutiny you can tell that they live hand to mouth?

The first priority of the government when it comes to social protection is the widows of the genocide. Different civil service organizations have also contributed enormously because immediately after the genocide for everyone, it was about how we rebuild our society — widows of the genocide where the first category of people because most of the men had been killed. So we had a significant population of women who were traumatized and had been affected in different ways. Of course, things can't be 100 percent perfect. Many have been encouraged to start income-generating projects to earn a living. However, most of the times, their business ventures don't thrive because of trauma and occasional bouts of depression.

For me, what I would see that will continuously help these women is some consistent therapy and counseling. The government also needs to invest more in mental health.

Do you think there's a time when these women will heal?

Honestly, I would say no. I'm speaking from my own experience as a survivor of the genocide. I have heard from women who were raped and are traumatized beyond recovery. So that's why for me I don't think there can be a total recovery but perhaps better management of the grief that they are going through.

Chantal Umuhoza is the Executive Director of SPECTRA, an organization of young feminists that also supports widows