Russian police detained some 150 demonstrators at protests on Sunday, Dec. 14. The Marches of Discontent were organized by opposition politicians and critics who formed a new political party to challenge the Kremlin. 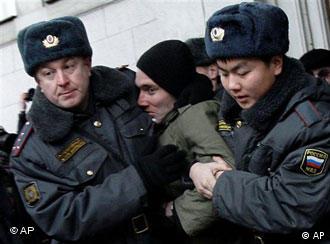 Police spokesman Viktor Biryukov told the Interfax news agency that 90 arrests were made in Moscow for participating in an illegal demonstration. A self-proclaimed March of the Dissidents in St. Petersburg led to about 60 arrests.

About 500 people gathered at the two demonstrations to protest the government's reactions to the financial crisis and ongoing attempts to change the Russian constitution. Eyewitnesses reported that special OMON police units used violence to disperse the protesters.

Ahead of the arrests, a spokesman for the Moscow police told the Interfax news agency that authorities would be "tough but lawful" in dealing with the unsanctioned protest. 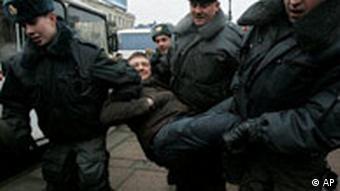 Opposition groups have little support among the Russian public

Witnesses said that police trucks sealed off two squares in central Moscow, where the Other Russia coalition of opposition groups wanted to start its march. Police cordons prevented a handful of opposition supporters from entering the squares, Reuters news agency reported.

"They are saving their money," Sergei Gulyayev, a senior member of Other Russia coalition, told a rally in St. Petersburg. "They will not save the Russian economy. With this government, this president and this prime minister we are heading to a collapse."

Despite the media attention they receive, opposition groups enjoy little support among the broader Russian public, particularly as the country's economy has improved over the last eight years.

One day after opposition party founded

According to the Internet site kasparov.ru on Sunday, among those arrested by police was writer Eduard Limonov, head of outlawed National-Bolshevik party. According to media reports, OMON units also arrested about 50 former officers who sought to join the opposition protests.

"We are only trying to exercise our constitutional rights to demonstrate peacefully," Kasparov said.

Saturday's announcement of the new Solidarity political party was seen as an effort by the traditionally splintered Russian opposition to try to unite against what it sees as an increasingly authoritarian Kremlin.

Terrorism and spying are too serious for juries to rule on, Russian lawmakers said. In a move human rights groups fear will weaken the judiciary's independence, judges may soon be deciding all verdicts on serious crime (06.12.2008)