Russia says US whistle-blower Snowden has not applied for asylum

US whistle-blower Edward Snowden has not yet submitted an official request for asylum, Russian authorities said. The former US intelligence contractor had announced on Friday that he would apply for asylum in Russia. 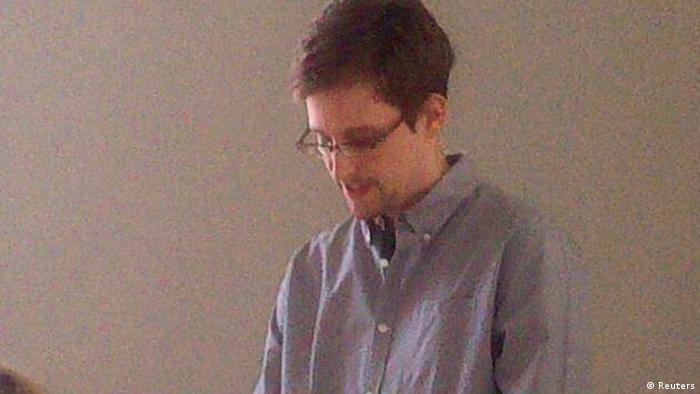 Snowden made his first appearance in three weeks on Friday alongside Russian rights activists and lawyers in the transit zone at Moscow's Sheremetyevo airport, where he has holed up since fleeing from Hong Kong on June 23.

The 30-year-old former systems analyst who worked as an intelligence contractor said he had applied for refuge in Russia only until he could travel safely to Latin America. However, officials have said that application has yet to materialize.

"We are not in contact with Snowden," Russian news agencies quoted Foreign Minister Sergei Lavrov as saying in Kyrgyzstan, where he was attending a meeting. He added that he had learned of Snowden's meeting with Russian human rights activists and public figures at the airport on Friday from the media, "just like everyone else."

Snowden's planned application strained already tense relations between the United States and Russia. The US government has canceled Snowden's passport to prevent him from traveling.

"If an application is received, it will be processed according to the legal procedure," Konstantin Romodanovsky, the head of the Migration Service, told Russian media.

Snowden's fate rose to the top of the US-Russian bilateral agenda on Friday, when Presidents Barack Obama and Vladimir Putin personally discussed the fate of the whistle-blower via telephone.

Data surveillance: how much is too much?

The recent snooping scandal took an unexpected turn after the US National Security Agency (NSA) was accused of having bugged EU institutions in Washington, New York and Brussels. (12.07.2013)

A White House press release did not indicate any kind of breakthrough on Snowden's status. The release simply said that the two leaders had "discussed a range of security and bilateral issues, including the status of Mr. Edward Snowden and cooperation on counterterrorism in the lead-up to the Sochi Winter Olympics."

Putin had previously offered asylum on the condition that Snowden cease leaking secrets to avoid harming Russia's US "partner."

On Friday, State Department spokeswoman Jen Psaki said that the United States disapproved of the Kremlin's giving the fugitive a "propaganda platform."

Venezuela, Bolivia, Nicaragua have offered Snowden haven if he reaches their borders. Snowden had said on Friday that he saw no other way to leave the transit area of the airport than with refugee papers, adding that several countries had made it "impossible for me to travel to Latin America and enjoy the asylum granted there."

The United States has urged nations not to give him passage, and last week several countries denied a plane carrying Bolivian President Evo Morales home from Russia access to their airspace on suspicion that Snowden was on board.

A former contractor at a National Security Agency facility in Hawaii, Snowden revealed last month that under a prgram called PRISM the US has access to vast amounts of data such as emails and chats from companies including Facebook and Google. The US has since charged him with espionage and theft of government documents, setting off a global pursuit to bring Snowden home to face prosecution.