Russia and EU Wide Apart on Ukraine Election | Europe | News and current affairs from around the continent | DW | 26.11.2004

As pro-opposition demonstrators occupied Kiev's Independence Square for a third straight day, the European Union and Russia appeared divided over the Ukrainian election at a summit in the Hague on Thursday. 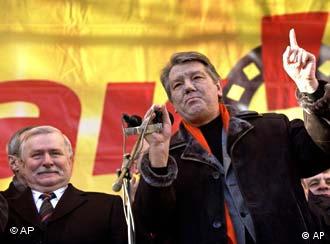 Following a meeting with the EU leadership, Russian President Vladimir Putin warned against plunging Ukraine into "mass mayhem" and said differences in the Ukrainian election should be settled in the courts.

"I am deeply convinced that we have no moral right whatsoever to push a major European state to whatever mass mayhem," said Putin, according to Reuters. "From my perspective … all claims should go to the courts."

On Thursday, Yushchenko won a significant battle when Ukraine's highest court ruled against the publication of the election results. The ruling effectively blocks Yanukovych's inauguration.

The opposition candidate enjoys strong support in Western Europe and Washington. Former Polish president Lech Walesa traveled to the capital and appeared with Yuschenko at a rally. While EU and the United States have called for a recount, Putin reiterated his support for Yanukovych on Thursday. 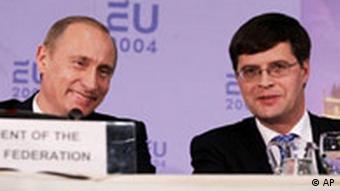 "Both EU and Russia are keen to see a stable, democratic country … and therefore we need to ensure that what is done reflects the will of the voters," said Dutch Prime Minister Jan Peter Balkenende, whose country is holding the rotating presidency of the EU, following the meeting with Putin.

But Balkenende maintained that the election results should be examined by a team of international observers. He acknowledged that though the approach might be different, Russia and Europe shared a desire that the country not become consumed in a spiral of violence.

German Foreign Minister Joschka Fischer has been on the phone with Yuschenko and outgoing President Leonid Kuchma, who favored Yanukovych, as well as with US Secretary of State Colin Powell and a few of his European counterparts.

Referring to Putin, Fischer said that everyone "must work towards a democratic and acceptable solution."

The fact that Russian and Western European leaders are weighing in the election show how important Ukraine is becoming as a bridge between Russia and Europe. Observers say the election could mark a turning point in the ex-Soviet republic's recent history.

Putin, who enjoyed close relations with the controversial Kuchma, came out repeatedly in favor of the outgoing President's chosen successor. Europe and Washington, on the other hand, would like to see Yushchenko, an economist who has promised to lead the country in a Western direction, in power.

"There will be consequences in the overall relations between the EU and Ukraine if there is not a serious, objective and balanced review of the electoral process and the electoral results," he said.

Though exit polls on Sunday indicated Yushchenko had a lead of several percentage points over Yanukovych, the official Central Election Committee declared Yanukovych the winner by a slim margin on Wednesday. 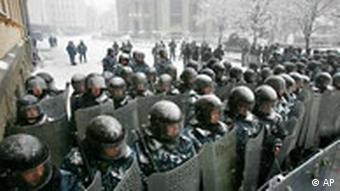 Yushchenko immediately protested as his supporters set up a tent city in front of rows and rows of riot police. In the freezing cold and snow, they put flowers in the shields of the officers and called for change.

Yushchenko's campaign team have already filed a complaint to Ukraine's Supreme Court regarding the conduct of officials overseeing the election. The estimated 3,000 international observers sent by the Organization for Security and Cooperation in Europe have reported widespread voter fraud -- including ballot stuffing, and double voting by Yanukovych supporters.

A tense standoff has gripped Ukraine after its pro-Russia prime minister won the presidential election and the opposition mounted massive protests to contest results of a vote that Washington and Europe said was rigged. (Nov. 23, 2004)

Ukrainians vote Sunday for a new president in a bitterly-fought runoff election that will determine whether this strategic former Soviet republic turns toward Europe or remains under Moscow's shadow. (Nov. 21, 2004)

In the middle of the dispute over the Ukrainian election result DW-World readers predict varying outcomes for the future of the country. (Nov. 24, 2004)