Rumors of US plans for Libya, Syria cause concern | World | Breaking news and perspectives from around the globe | DW | 27.06.2011

Rumors of US plans for Libya, Syria cause concern

Among the rumors circulating of US plans for expanded military operations in Libya and a possible intervention in Syria lie certain truths which are cause for concern - despite the dismissals of analysts. 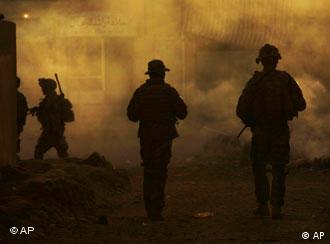 When the United Nations Security Council passed Resolution 1973 on March 17 of this year, it authorized the use of force by UN member states, granting them the right to "take all necessary measures to protect civilians under threat of attack in Libya, including Benghazi, while excluding a foreign occupation force of any form on any part of Libyan territory."

In the three months that have followed, the rules of Resolution 1973 appear to have been bent to allow the NATO-led mission to not only protect civilians in Libya but actively pursue the forces of Libyan leader Moammar Gadhafi, target his strongholds and effectively force him out of power.

This 'mission creep' has caused fractures and divisions within the international coalition that originally agreed to take on the UN's Libyan operations.

The Arab League, whose involvement helped sell the mission to the Arab world, is becoming increasingly nervous about what it sees as NATO's new goal of regime change. Meanwhile, those members of the Security Council that abstained from the Resolution 1973 vote are concerned by developments they fear may lead toward a land invasion of Libya and the contravening of the UN resolution.

Russia in particular has been angered by the deployment of military advisors and Special Forces operatives from the US, France and Britain to support the efforts of the Libyan opposition. 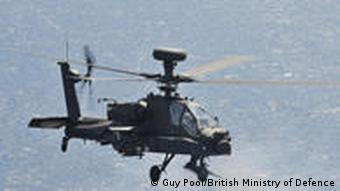 The use of attack choppers is an escalation, says Russia

Foreign Minister Sergei Lavrov told reporters earlier this month after France and Britain had deployed attack helicopters to Libya for the first time that the prospect of land operations in Libya was against Moscow's wishes. "We consider that what is going on is either consciously or unconsciously sliding toward a land operation," he said. "That would be very deplorable."

Lavrov's comments came just days before NATO agreed to extend its mission in Libya for a further 90 days and less than a week after French President Nicolas Sarkozy, British Prime Minister David Cameron and US President Barack Obama agreed on the fringes of the G8 summit at the end of May that Gadhafi could not be negotiated with and that "the shadow of tyranny" must be lifted.

Soon after, a number of unsubstantiated reports based on anonymous military sources began flooding the Internet claiming that US forces were already being readied for a full-scale ground invasion of Libya.

The alleged military sources at the US Army's Fort Hood base in Texas, where these preparations were said to be taking place, revealed to the Infowars.com website that the invasion was being planned for October. This report spawned a wave of similar extrapolations on the theme of a potential escalation in Libya, again with little solid evidence to back them up.

"The prospect of the US considering a land invasion of Libya is very unlikely and with no credible sources to back up these rumors it would be very hard to gauge their authenticity," Dr. Robert Jackson, an international security expert at Chatham House, told Deutsche Welle. "It is possible that these rumors are being inspired by and confused with ship movements in the region."

Other experts believe the US has absolutely no appetite for further involvement in Libya.

"All efforts in Washington are now being diverted to completely withdrawing from Afghanistan and Iraq. There is no appetite or budget room for more war or 'contingencies,'" Dr. Geoffery Wawro, the director of the Military History Center at the University of North Texas, told Deutsche Welle. 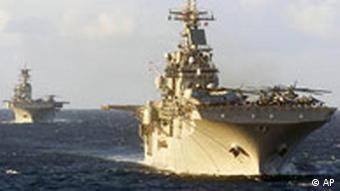 US Navy movements around Libya and Syria stoke rumors

Whether it is part of a future invasion plan or not, the existence of a recently re-deployed US Navy strike group in the Mediterranean cannot be disputed and its arrival could certainly have helped generate the buzz about a possible escalation.

The group, led by the Nimitz-class nuclear aircraft carrier USS George H.W. Bush, along with the guided missile destroyers Truxtun and Mitscher, the missile cruisers Gettysburg and Anzio and eight squadrons of aircraft, has been sent to strengthen the US Sixth Fleet which is based in Naples, Italy. Most of the NATO missions in Libya to date have originated from bases in that country.

If an invasion was being planned, the amount of naval firepower now available in the region would give more than adequate support for any land forces being deployed on Libyan soil.

This is not the only US Navy strike group on the move. The USS Bataan, which alone can land more than 2,000 marines, equipped with helicopters and vertical takeoff planes, artillery and tanks, along with two other amphibious assault ships, anchored in Italy in mid-May. Reports suggest that the Bataan and its flotilla then left for an undisclosed location off the Syrian coast, prompting further rumors of a potential US intervention in Syria.

The independent news site DEBKAfile, again quoting anonymous US military sources, reported that the Bataan was moving into position as part of a potential mission involving US and Turkish forces to stop the anti-opposition crackdown currently taking place in Syria and to counter any response from Iran and Hezbollah in Lebanon to any such operations.

It also added that, under the advice of the Iranian secret service, Hezbollah had moved its rockets from northern Lebanon to areas in the center of the country "out of range of a possible American operation in Syria." 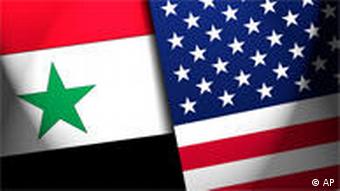 Analysts say an intervention in Syria would be too complex

The report included statements from Syrian and Iranian officials warning against US interference but offered no Western sources to back up its claims. However, while there is no documented evidence that suggests the US is planning to intervene in Syria, the presence of US warships in the vicinity - for whatever reason - supported by Iranian and Syrian responses to its presence cannot be denied.

Analysts are not convinced that the US presence is a precursor to an intervention in Syria.

"It is very unlikely that the US will get involved with a direct intervention in Syria," Dr. Jackson said. "There is too much opposition from Russia there and the UN Security Council will never sign off on a resolution to justify it."

US security expert Xenia Dormandy agrees that the probability of the US significantly increasing its military resources to Libya is extremely low. She also believes that, unless there's a major contextual change in Syria and in Yemen the same is also true for these countries.

"Decisions in Washington today have to factor in politics," she told Deutsche Welle. "The politics in America right now are that spending needs to be focused at home, on jobs in the US, rather than on more operations overseas in areas perceived as being of dubious national interest to the US."

Wawro says the looming specter of another Iraq means the US will not risk any type of deployment on the ground.

"The Syrian situation is analogous to Iraq in the sense that 'if we break it, we own it,' which is a burden that Washington won't be eager to inherit. The sectarian differences in Syria are as deep as they are in Iraq. Decapitating the Assad regime might lead to a civil war. That is not an argument for supporting Assad, it is however an argument against an 'Operation Syrian Freedom.'"

Obama should stop thumbing his nose at the War Powers Act

Barack Obama and Congress are wrangling over the War Powers Act and whether it applies to Libya. Instead of quarreling Obama should heed Congress' sensitivities, says Barry Blechman. (21.06.2011)

As the crackdown on anti-government activists and protestors in Syria becomes increasingly brutal, it appears that the fate of the popular uprising and perhaps the country itself has been placed in the hands of one man. (21.06.2011)

Is Syria the next Libya?