Mitt Romney, the prohibitive favorite to win his party’s nomination, hasn't minced words on world affairs. But while he’s routinely clobbering Obama’s foreign policy, Romney wouldn’t do all that much differently. 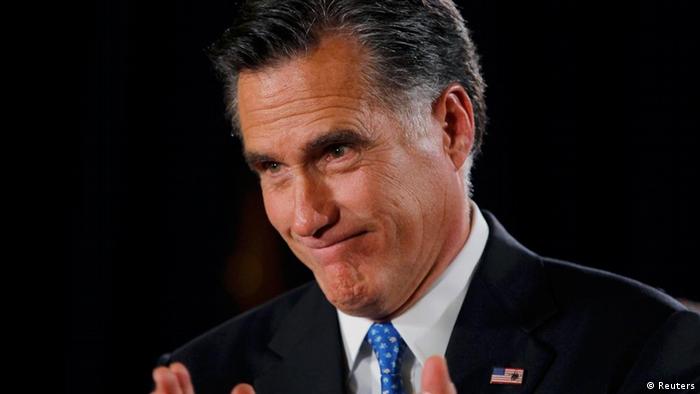 Republican candidate Romney is painting a picture of stark contrast. He has labeled President Barack Obama an appeaser, calling him the most dangerous president in our lifetime. He opposes negotiations with the Taliban and has criticized the United Nations as a talking club that gives a platform to international dictators. He has vowed to take a tougher line vis-à-vis Russia, China and Iran and promises to beef up America's military prowess.

The official blueprint for Mitt Romney's foreign policy is "An American Century: A Strategy to Secure America's Enduring Interests and Ideals," a 44-page white paper. In it neither NATO, arguably the world's most important security alliance, nor the European Union, the world's biggest economic bloc, are mentioned once. What's more, the majority of Mitt Romney's foreign policy team of 24 special advisors has served under President George W. Bush.

All of this combined, Governor Romney's stance and his roster of advisors, leads to the question whether a Romney foreign policy would simply look like George W. Bush redux?

"I think that would be a very grave misinterpretation of his foreign policy," says Kerry Healey, a special advisor on Mitt Romney's foreign policy team. "He has very strong ideas on American exceptionalism and the need for American leadership in the world."

As for the make-up of the advisory team, Healey, who served as Lieutenant Governor of Massachusetts with Romney from 2003 to 2007, notes that the campaign is taking advice from the entire spectrum of conservative foreign policy experts from the past half century. But of course, she adds, many of them have worked most recently during the eight years of Bush's tenure.

"But that should not be viewed as an indication of any sort of approach to foreign policy that would be looking back to the Bush era," says Healey.

No mention of NATO and EU

Asked about the absence of NATO and the EU in Romney's foreign policy strategy, Healey emphasizes that NATO remains a key alliance for the US and that a Romney presidency unlike the Obama administration would be dedicated to "our traditional allies such as Israel and Great Britain and Germany and in South America to Colombia and in Asia to South Korea and Japan in new and stronger ways."

Inderjeet Parmar, a US foreign policy expert at the University of Manchester in the UK has a different explanation why NATO and the EU fail to appear in the Romney blueprint.

"I don't suspect he's forgotten it," he says. "But I think they take it for granted in a big way."

Klaus Larres, a professor of history and international relations at the University of North Carolina in Chapel Hill concurs and says that NATO will continue to play a crucial role in a Romney administration. That's not necessarily the case with the EU, however. 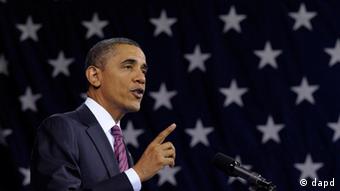 "In the Republican camp Europe has became a very bad word and Gingrich and also Romney himself keep saying that we don't want to become like the Europeans," says Larres.

Often lacking a clear insight in how the EU functions, Republicans really perceive Europe as a socialist continent diametrically opposed to what they consider as American values. "This will of course be toned down when and if a Romney administration comes to power, but it will linger on, because I think this is genuine," argues Larres.

On the key US foreign policy hotspots Afghanistan, Iran and China, the experts predict that a Romney foreign policy - despite the tough rhetoric - would not look much different than Obama's.

After 11 years of fighting in Afghanistan, the American public is war-weary and polls show a clear majority for bringing US troops home.

Still, Mitt Romney continues to take a tough line on Afghanistan. He recently rebuked Mitchell Reiss, one of his advisors and a former US diplomat who played a key role in the Northern Ireland Peace deal, for advocating negotiations with the Taliban.

During the Republican debate in Florida when questioned how he wants to end the Afghanistan war without talking to the Taliban, Romney quipped: "By beating them."

That view hasn't changed, notes Healey, unless certain preconditions are met, Romney doesn't want to talk to the Taliban. "We strenuously object to the notion that you ought to begin negotiations from a point of weakness as opposed to a point of strength."

Citing the public sentiment in the US and the fact that Washington is "in a bit of a pickle in terms of budget deficits," as Parmar puts it, the experts are not so sure his tough stance will last. Larres expects that Romney's rhetoric on Afghanistan will mellow as the election date draws closer.

On Iran's nuclear ambitions Romney has also climbed out on limb, promising Americans that, unlike Obama, with him as president Tehran will not get a nuclear weapon.

Romney advisor Healey adds that a Romney administration would take an entirely different approach to Tehran than the current administration. She blames Obama for failing to stand up and strongly supporting the Iranian people during the election protests in 2009 and vows that a Romney government would come out and back such a movement.

"The kind of language being used by Romney is reminiscent of the Bush administration," says Parmar.

Still, Parmar and Larres consider Romney's harsh tone vis-à-vis Tehran as largely rhetorical posturing and electioneering. They note that Obama has also taken an increasingly tough stance on Iran and has publicly left all options on the table.

In the end, neither Obama nor Romney is interested in engaging in another military conflict in the Middle East. Nevertheless, this tough rhetoric fuels the tensions in the region. "And it probably ramps up Iran's desire as quickly as possible to develop their nuclear weapons programs," says Parmar.

Romney has also advocated a tougher stance toward China, but a closer look reveals again that his position is not too different from Obama's. Romney favors closer ties with US allies in the region and a stronger military American presence in the area, a sort of soft containment of Beijing.

That is essentially what Obama has done by his decision to station troops in the area and by forging deals with India and closer regional ties with Asian countries to crowd out China.

"When Romney talks about the currency manipulations by China that is not wrong and the Obama administration sees that in a very similar way, but what do you do about it," says Larres. Aside from verbal pressure, there is little Washington can do to punish a rising power like China whose economy is deeply intertwined with that of the United States.'

Of the whole spectrum of international relations, Romney's policy toward Russia - not a rising power, but a great power fallen on hard times - may be the only where a true change in gears is the most likely, argues Parmar.

Romney has promised to "reset the reset" with Moscow, which Obama announced after taking office. He has vowed to check "aggressive or expansionist behavior on the part of Russia" and to support economic and political reform in the country. 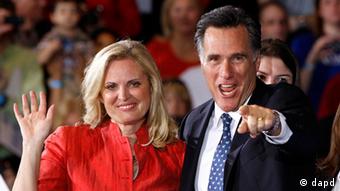 Romney and his wife after the Florida primary

His advisor Kerry Healey says that Romney "is concerned about Russia sliding back from their progress toward democracy and he is watching that. And he feels that the Obama administration's reset policy, the open hand if you will that has been extended to Russia has not been taken." Obama's misguided Russia policy according to Healey "has left the world a more dangerous, not a safer place."

Still, with the possible exception of Russia, a Romney foreign policy, conclude the analysts, would probably not look much different than what we see under Obama. The economic and political realities on the ground in the US and elsewhere simply won't allow it and so the room to maneuver for any president is limited.

Granted, a President Romney would strike a more unilateralist tone, but that tone probably won't be reflected by radical policy shifts. A Romney administration - despite the current verbal blustering - is thus unlikely to bend the general rule that Washington's foreign policy is like a supertanker that changes direction only incrementally.

According to projections by US media outlets, Mitt Romney handily won the Republican caucuses in Nevada, his second state win in a row on the way to becoming the party's candidate to put against President Obama. (05.02.2012)

Mitt Romney is a self-made billionaire with leadership experience and a scandal-free private life. So why doesn't the influential conservative wing of the Republican Party like him? (24.01.2012)

Mitt Romney has won the Republican primary in Florida, defeating rival Newt Gingrich by nearly 15 percent. Florida is the largest of the first four primaries. (01.02.2012)