Victor Ponta is the first sitting prime minister in Romania to be indicted and to have assets seized. Despite calls to resign, he has not indicated whether he will step down. 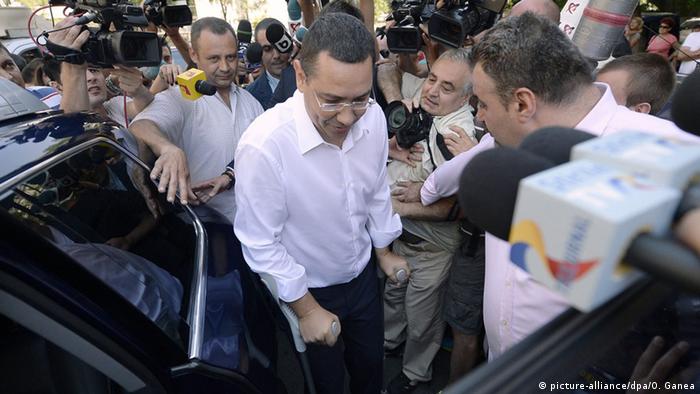 Romanian prosecutors formally charged Prime Minister Victor Ponta with forgery, conflict of interest, tax evasion, corruption and money laundering in connection with his professional activities as a lawyer between 2007 and 2011, prior to when he took office in 2012.

Investigators from Romania's anti-corruption agency, known by its acronym DNA, accused Ponta of receiving the equivalent of $61,000 (55,000 euros) from Dan Sova, a member of parliament and close ally of Ponta's, whom the DNA agency suspects of abuse of power.

Prosecutors also "temporarily seized assets," without saying what was confiscated. Ponta did not speak to the press after he left the prosecutor's office on Monday.

Ponta has repeatedly denied any wrongdoing since investigators opened the case on June 5, saying he would cooperate fully with the investigation. He is the first sitting Romanian prime minister to be criminally indicted.

As prime minister, he can enjoy immunity from some of the charges, such as conflict of interest, but he cannot dodge the tax evasion or money laundering charges.

After prosecutors announced the investigation in June, the Romanian parliament held two votes - one on whether to lift Ponta's immunity and the other on the possibility of holding a vote of no-confidence. Both measures were defeated.

Ponta has, however, stepped down as leader of the Social Democratic Party, Romania's largest party, saying he wished to prove his innocence.

This case is the latest in a string of recent corruption investigations by the DNA agency targeting top Romanian officials.

Italian authorities have seized more than 1 billion euros from five siblings who allegedly used Mafia connections to expand their business. The group had previously testified against another Cosa Nostra family. (08.07.2015)

Hungary's plans to build a border fence to stop migrants passing through have triggered a huge outcry. But as Lidija Tomic reports from the border with Serbia, the migrants remain undeterred. (01.07.2015)

Abortions in the US state of North Carolina will no longer be legal after 20 weeks of pregnancy, following a new ruling by a federal judge.

At least 26 people have died with several dozen injured amid separate forest fires raging across drought-hit northern Algeria. Most of the fatalities were near the border with Tunisia.