Recovery crews working at the site of a garment factory collapse in Bangladesh have pulled a survivor from the rubble. The death toll from the building collapse has risen to over 1,000. 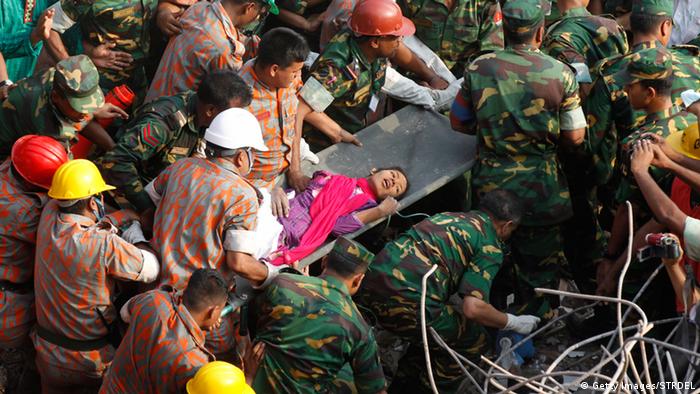 A woman was rescued on Friday afternoon after spending 17 days trapped under the rubble. Bangladesh television broadcast live footage of emergency service workers pulling the woman from the collapsed building, as onlookers cheered.

The woman, identified as Reshma, was shown being carried on a stretcher and loaded into an ambulance. According to rescuers, she had access to water being pumped into the building and reserves of food which lasted until two days ago. She had been trapped between a beam and a column.

Rescuers heard her calls for help as they were clearing rubble.

The discovery of the survivor came as officials on Friday reported that 1,021 bodies have been removed from the rubble of the April 24 factory collapse in Savar town, near Dhaka. The eight-storey building collapsed in one of the world's deadliest industrial disasters.

Army spokesman Captain Shahnewaz Zakaria said recovery crews used "cranes, bulldozers and excavators" to pull 130 bodies from the rubble since Thursday morning and that more bodies were found in the pancaked lower floors.

The bodies, thought badly decomposed, could be identified by mobile phones in their pockets, as well as identity cards around their necks.

"Of the total dead, most are female garment workers," he explained.

More than 3,000 people were working in the five garment factories located in the building, making clothing for retailers such as Benetton, Mango and Primark.

The structure collapsed after a loud bang, trapping them. Nearly 2,500 people were rescued, with around 1,000 suffering serious injuries.

A government probe is working to determine the cause of the collapse, with initial findings pointing to poor construction and disregard for safety regulations.

The collapse was followed by a fire this week Wednesday at another Bangladesh factory in which eight people died. The fire consumed the lower floors of the 11-storey building, which had closed for the day, and the smoldering acrylic products produced smoke and poison gas that killed those trying to flee.

These accidents have raised awareness to the often deadly working conditions in the country's $20-billion (15.3 billion euro) garment industry.

Protesters demonstrate at start of AfD conference 0m ago