Reporters Without Borders stages whistleblower debate | Germany| News and in-depth reporting from Berlin and beyond | DW | 29.04.2014

For some Edward Snowden is a hero, for others a traitor. A recent panel discussion sponsored by Reporters Without Borders showed the tension between journalists and intelligence agents when it comes to whistleblowing. 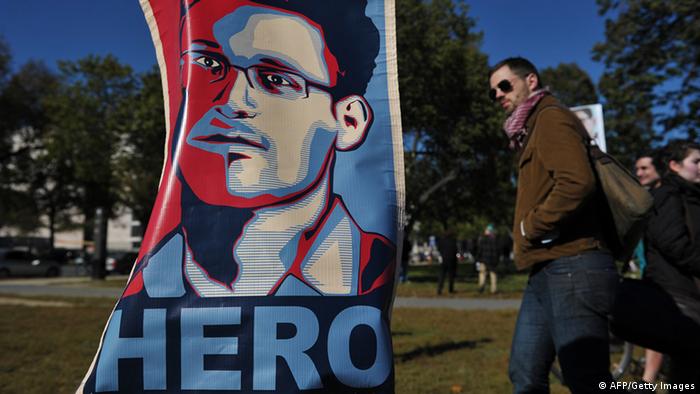 May 3 is International Press Freedom Day, which media organizations often use as an occasion to report on press abuses around the world. The German section of Reporters Without Borders usually devotes the day to a single country where journalists have particular difficulties - a decision that is discussed a few days ahead of time.

This discussion took place on Monday (28.04.2014) in Berlin, only this time no country was chosen - instead the German Journalists Union (DJV) and the Federation of German Newspaper Publishers (BDZV), decided to discuss the issue of whistleblowers.

The panel discussion looked promising. Not only were three journalists invited, but Hans-Georg Maassen was also present. Maassen is the president of Germany's federal domestic intelligence agency, the Verfassungsschutz (BfV). At least in theory, this would be a classic debate about the appropiate balance between transparency and secrecy in a democratic society.

Though it may have looked like an unequal debate at first, it quickly emerged that one of the journalists, Torsten Krauel of the conservative Springer publishing company, was a skeptic. 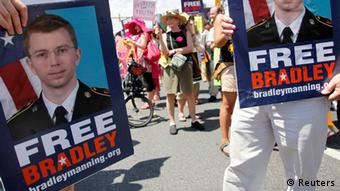 The Manning case has polarized opinion in the US

Snowden, with his revelations about the US National Security Agency (NSA), has become the defining image of the whistleblower.

Krauel accused him of revealing more than was necessary and basically informing the terrorist network al Qaeda that it was being observed by the NSA - presumably dismissing the idea that the jihadist movement had already made that assumption. Krauel also suggested that he himself had "of course" been kept under surveillance as a correspondent in Washington " - though he did not reveal how he knew that.

The other two journalists came out in support of Snowden. Alexa O'Brien attacked not only American politics, but also sections of the media for producing what she called "propaganda." As evidence of this claim, she repeatedly brought up the case of Chelsea Manning, the soldier who sent hundreds of thousands of military and diplomatic files to the Wikileaks platform from a base in Iraq. Manning, a transgender person, changed her name from Bradley to Chelsea in 2013.

Manning said that she had intended to spark a public debate about the wars in Iraq and Afghanistan by leaking the material. Manning was sentenced to 35 years in prison for revealing classified information.

Snowden, currently living in exile in Russia, would probably face a similar fate if he returned to the United States. No Western country offered him asylum.

Maassen described Snowden as an enigmatic figure, admitting that he did not know the former NSA contractor's motives. But the German intelligence chief said he understood why his colleagues in the US would consider Snowden a traitor and accused the former intelligence contractor of "plundering" the NSA.

Maassen said that he found it particularly astonishing that Snowden recently appeared on Russian TV to ask President Vladimir Putin a question, "at a time when there is a kind of Cold War once again." He also claimed there was no actual proof that the NSA had broken German law. 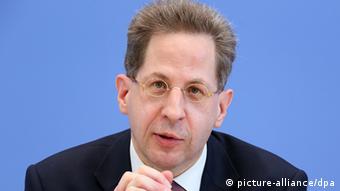 Maassen sympathized with his American counterparts

For him, the value of Snowden's revelations is obvious. Mascolo said that even the Americans believe that the leaks had sparked an important public debate. The self-critical statements by the US government and the promised investigations by congressional committees had proved as much.

But as much as he supported Snowden, Mascolo also accepted the principle that the state had a "legitimate need to keep secrets." For him, the problem was that "the powerful" had too much of an interest in using "formal state secrecy" as pretense to hide information that the public should know.

But within the media, said Mascolo, the situation was complex. Though media organizations had a duty to act as a "fourth estate" and reveal information that's in the public interest, they are also businesses. In other words, the interest in a headline sometimes beats the importance of a news story.

From Russia - with love?

Germany's domestic intelligence service has reported that Russian secret services have been stepping up spying in political and economic circles in Berlin. But though it may have caused a stir, the news is not new. (23.04.2014)

A dispute in Berlin about whether to seek testimony from NSA leaker Edward Snowden has prompted a senior conservative to quit as chairman of a new German parliamentary inquiry. (09.04.2014)