Report: World Cup Match May Have Been Fixed

A match at the 2006 World Cup involving five-time world champions Brazil may have been rigged by an Asian betting syndicate, an investigative journalist claimed in an interview with a German magazine. 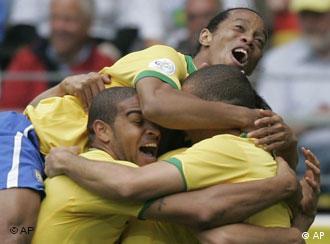 Some are now asking if Brazil deserved to celebrate in Dortmund

In the report to appear in the Monday, Sept. 1, edition of Der Spiegel newsmagazine, the Canadian journalist Declan Hill said his research had shown that an Asian syndicate wanted Ghana to lose the quarter-final match by at least two goals. Brazil went on to win 3-0 in Dortmund.

Hill, whose book on match-fixing will be published in Germany on Tuesday, said three years of research had shown that a former Ghana international had acted as the middleman between Ghana's players and the head of a betting syndicate in Bangkok.

The German publication said its own research had shown two matches in Germany to be suspicious after huge sums were placed on them by a Malaysian who has been convicted of attempted match-fixing.

According to the report, William Bee Wah Lim placed 2.8 million euros ($4.1 million) with Asian bookmakers on Kaiserslautern losing a first-division match at Hanover on Nov. 26, 2005. As a result of Hanover's 5-1 victory he won 2.2 million euros. 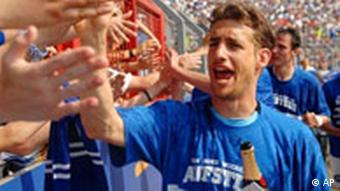 He placed almost 4 million euros on Karlsruhe beating Sportfreunde Siegen in a second-division match on Aug. 7, 2005. Karlsruhe won the game 2-0.

The report said investigations had produced evidence that Lim had contacts with players from Kaiserslautern, Karlsruhe and Sportfreunde Siegen, although the players have protested.

Lim was sentenced to a jail term of two years and five months a court in Frankfurt in June 2007 after being convicted of attempted fixing of matches in the German regional league (then third division) and the Austrian first division. The two Bundesliga matches were not part of the court proceedings.

He was released on conditional bail of 40,000 euros but has since left the country. A warrant for his arrest was issued in January.

The German Soccer Federation (DFB) and German Soccer League (DFL) said in a joint statement they wanted a comprehensive investigation into the latest allegations.

The statement said there had been no grounds until now for thinking either of the two matches could have been fixed. However the company Sportradar has been instructed to carry out an analysis of the matches.