Religious Dialogue - A Bridge over Gori

Around the world people of different religions are living peacefully side by side. But intolerance, stereotypes or a lack of knowledge can cause dangerous tension, as our drama “A Bridge over Gori” shows. 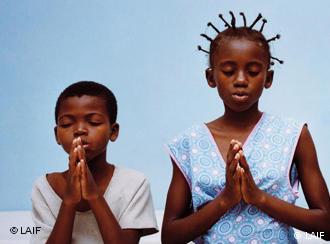 Belief plays an essential role in the lives of many African women and men, young and old, rich and poor. In Africa, the three main monotheistic religions – Judaism, Christianity and Islam – coexist parallel to traditional African religions and thereby reflect Africa’s cultural diversity.

Nevertheless, in the small town of Gori, religious diversity is slowly becoming a powder keg. The river that divides the flourishing market town separates two very influential families: the Dembeles and the Omers. The Dembeles are Christian, the Omers Muslim. Their ancestral rivalry seems to be set in stone.

At least it seemed so until Harry Dembele met Leila Omer. Both attend Ubuntu College, a progressive, interfaith school for 16-18 year old boys and girls.

Bravely defying the weight of the past and its prejudices, the two young people learn about the importance of dialogue, collaboration and tolerance. Does their forbidden love have a chance given the circumstances?

Learning by Ear - Religion - 01 - Back to Ubuntu College.mp3

Learning by Ear - Religion - 01 - Back to Ubuntu College.pdf

Learning by Ear - Religion - 01 - Back to Ubuntu College.pdf

Learning by Ear - Religion - 08 - A friend gained, a friend lost.pdf

Learning by Ear - Religion - 08 - A friend gained, a friend lost.pdf