Reform from within may be only chance for change in North Korea | News and current affairs from Germany and around the world | DW | 09.06.2009

The list of what the world community considers to be North Korean provocations is growing. A no-sail-zone and the conviction of two US journalists are the latest examples. But what can the world really do about it? 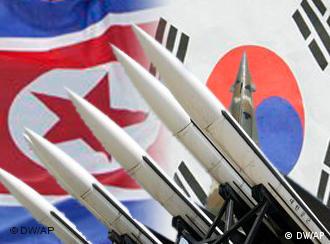 After North Korea's nuclear test a couple of weeks ago and repeated threats against other countries, the international community stepped up its rhetoric as well. The UN Security Council is expected to pass a new resolution this week condemning the country's actions.

The US is considering putting North Korea back on its list of state sponsors of terrorism, reversing a decision by former President George W. Bush. What's more, both President Barack Obama and Secretary of State Hillary Clinton have both strongly criticised North Korea, a sign of the importance the issue has regained again in Washington. While Clinton raised the possibility of intercepting North Korean nuclear weapons shipments, Obama said he was "not intending to continue a policy of rewarding provocation.”

But, say experts, besides rhetoric there isn't really much the international community can do to make North Korea change its behavior. Impoverished and isolated, the country is already subject to sanctions, which have had little to no effect. A new UN resolution, additional sanctions or other forms of punishment would probably not lead to better results, but could instead increase the resilience of the regime and its people, notes Alexander Neill, Head of the Asia Program at the London-based Royal United Services Institute.

Neill believes that North Korea's leader, Kim Jong Il, after the collapse of the six-party-talks and with a new US administration sensed a security vacuum in the region, which he is trying to fill with his military posturing.

"North Korea sees a window of oppurtunity to gain ground and leverage with the US while the White House hasn't consolidated its Asia strategy yet." 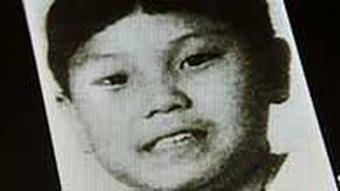 Besides the external reason - gaining the attention of the US - there is a domestic reason that is at least equally as important: the succession process. According to media reports, Kim Jong-Il recently decided that his youngest son, Kim Jong-Un should follow him as leader of North Korea. To install the 26-year-old Kim as his successor would be a risky break with the past, says Eric Ballbach, a North Korea expert at the Free University of Berlin.

"While Kim Jong Il was groomed to lead the country for almost 20 years, his assumed successor is very inexperienced, very young and without any military experience. This is very unusual for North Korea and was a big surprise."

By launching missile tests, threatening its neighbors and handing out the toughest possible sentence against two US journalists, Kim Jong-Il is sending a crucial signal to the military.

"This can be interpreted as an internal sign to the military leadership that North Korea despite the ongoing succession process is still very strong externally," argues Ballbach.

Neill adds that regime stability is the core issue for Kim Jong-Il, as it is for all dictatorships, and that all actions by North Korea have to be perceived from that angle. And it is not just for the North Korean leader that stability is the top priority. It is also the No. 1 reason why the only country that could make North Korea alter its behavior, has chosen not do to so.

"China is clearly not happy at all at what North Korea is doing, but it has decided that stability in the region is more important than a non-nuclear North Korea", says Ballbach.

Unlike the international community or even the US, China is Pyongyang's life line and most important trading partner.

"If China would decide to close its border for five weeks, the North Korean regime would collapse."

Beijing's rationale for keeping the current leadership in power is obvious: If the regime fails the result will be a leaderless country with nuclear weapons and thousands of troops in garrisons in an unstabile region, says Neill, who believes there is no quick and easy solution to the North Korean conundrum.

"The only way out is to promote an opening of North Korea to the outside from inside the regime, perhaps through Chinese interlocutors. The goal of this inside-out strategy is to slowly tease the more pragmatic faction inside the regime away from dicatorship towards international cooperation." 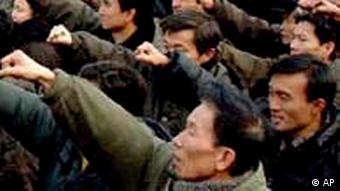 The idea to talk to so called moderates within a regime that has been described as stone-age communism may seem far fetched. But contrary to popular belief North Korea is not a one-man show where Kim Jong-Il makes every decision alone.

"There are different factions representing the party, the military and the state with different interests", says Ballbach. All of them play important roles and are part of the decision making process. Trying to tap into those various groups may be the only chance to effect change in North Korea, say the experts.

And the time could soon be ripe to put that approach into practice. "There could be a window of opportunity", notes Neill. "Whenever you have a succession in a totalitarian regime there is always some kind of purge and bloodletting before the new leadership has established itself. This is a chance to try to talk and influence the new leadership to open up and set a new course."

US journalists sentenced to 12 years hard labor in North Korea

Two US journalists have been sentenced to 12 years hard labor in North Korea. Negotiations for their release come amid increasing tensions over North Korea's nuclear program. (08.06.2009)

US says it will not accept a nuclear-armed North Korea

US Secretary of Defense Robert Gates has said that Washington will never accept a nuclear-armed North Korea and has sternly warned Pyongyang against transferring any nuclear material or technology. (30.05.2009)