Radovan Karadzic Refuses to Enter Pleas at War Crimes Tribunal | Europe| News and current affairs from around the continent | DW | 29.08.2008

Radovan Karadzic refused to enter pleas on all 11 counts of charges against him at the International Criminal Tribunal for the former Yugoslavia in The Hague. The court entered pleas of not guilty for him. 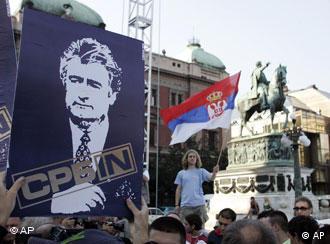 The former Bosnian Serb leader was told by the judge that pleas of not guilty would be entered by the court on his behalf, in accordance with court rules on Friday, Aug. 29. The tribunal's next session was set for Sept. 17.

"I will not plead in line with my standpoint as regards to this court," Karadzic answered to the first charge of genocide, referring to his challenge to the court's legitimacy. "This court is representing itself falsely as a court of the international community whereas it is in fact a court of NATO whose aim is to liquidate me."

Karadzic stands accused of genocide, crimes against humanity and war crimes, relating among other things to involvement in an attempt to destroy in whole or in part the Bosnian Muslim and Bosnian Croat ethnic groups.

Karadzic is alleged to have known about crimes including the killing of thousands of civilians in Srebrenica in 1995 by Bosnian Serb forces, and the shelling of Sarajevo, killing and terrorizing the city's civilians.

Friday's session of the court in The Hague came a month after Karadzic first appeared and requested a 30-day postponement to study the indictment.

The decision came just days after Karadzic asked the court to take Dutch judge Alphons Orie off the case, claiming he would not be neutral. 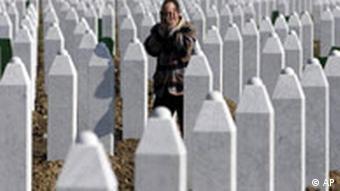 Karadzic has already said he will defend himself and has called for former US Balkans mediator Richard Holbrooke and ex-Secretary of States Madeleine Albright to appear at the tribunal.

The former Serb leader had no legal representation for Friday's appearance, but told the judge he would have put together "a team of associates" to assist him by the time the prosecution has amended the indictment -- expected to happen next month.

He has also questioned the legality of the case being brought against him and says he was offered immunity by Holbrooke.

Now aged 63, he had been on the run for some 12 years before his arrest on in Belgrade on July 21. Serbian authorities extradited him to The Hague on July 30.

He stands accused of ordering the mass killing of men from the eastern Muslim enclave of Srebrenica. The massacre resulted in the death of more than 8,000 Bosnian Muslim men and boys in July 1995.

His top military commander Radtko Mladic, also implicated in the massacre, is still at large. However, Serbia’s top war crimes prosecutor, Vladimir Vukcevic, said in Belgrade on Thursday he expected Mladic would be arrested soon, but declined to be more precise.

The trial of former Serbian leader and alleged war criminal Radovan Karadzic is to be presided over by a new judge, the international war crimes tribunal in the Hague has announced. (21.08.2008)

Former Bosnian Serb leader Radovan Karadzic has made his first appearance before a UN war crimes tribunal to answer genocide charges. He opted to delay his plea for 30 days and announced he would conduct his own defense. (31.07.2008)