A radiation leak at Germany's only uranium enrichment facility has left one man in hospital. Although there was no danger of exposure to the surrounding population, some groups are calling for the plant's closure. 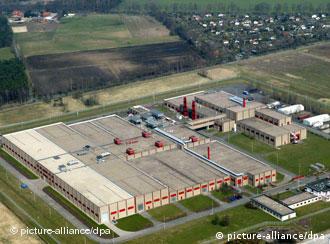 The facility in Gronau is one of a kind in Germany

An accident at Germany's sole uranium enrichment facility in North Rhine-Westphalia has left one worker in hospital under observation.

The incident occurred at the plant in the town of Gronau on Thursday afternoon, when a room in the uranium enrichment facility was accidently exposed to radioactive material. The worker was in the room when the accident occurred, and was taken to hospital as a precaution.

The man's arm, legs and feet were said to have been contaminated. He was also said to have suffered a shock, but doctors said Friday he was recovering well.

According to the plant's operating company, URENCO, there was no danger at any time to the surrounding population. The air in the room was filtered before being released, free of radiation, outside the facility. It is still unclear what caused the incident.

The incident has triggered calls for the closure of the Gronau facility from groups such as the Federal Association of Environmental Action Groups (BBU). In a statement released on the association's website, the head of the group, Udo Buchholz, said the accident in Gronau reminded him of contamination incidents at atomic facilities in the town of Hanau.

"They were taken out of operation, and the goal of the BBU and the local initiatives [near Gronau] is a similar closure of that facility," Buchholz said in the statement.

The former Green party environment minister of North Rhine-Westphalia Baerbel Hoehn has also called for an independent inquiry into the events at Gronau.

Germany has seventeen nuclear power plants, and one of the uses of uranium enrichment is to create fuel sources for such facilities.

Pulling the plug or counting the cash

The German government has the upper hand as it meets with heads of major energy companies in Berlin. Should the government close Germany's aging nuclear plants, or collect money from the companies to keep them running? (21.01.2010)

In the wake of a French investigation into reports that nuclear waste is sent from French plants to Siberia, news has emerged that Germany has a long tradition of shipping toxic waste to Russia. (15.10.2009)

Half a century has passed since Germany began exploring nuclear energy. DW-WORLD takes a look at the history of atomic power and protests against its use in the country. (10.09.2009)

Worker exposed to radiation in accident at German plant (22.01.10)