Putin says Ukraine under no obligation to join customs union

Russian President Vladimir Putin has expressed optimism that a political solution can be found to the crisis in neighboring Ukraine. He also denied putting any pressure on Ukraine to join a customs union with Russia. 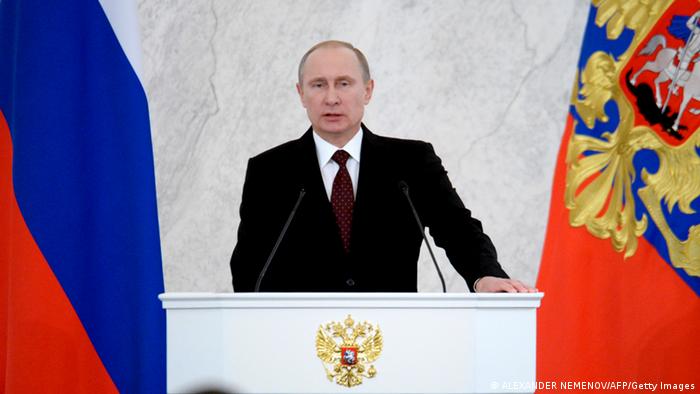 The Russian president used his annual state-of-the-nation speech to address a wide range of issues of national interest, including the ongoing political standoff in Kyiv.

"I hope that all political powers in the country manage to reach an agreement that is in the interests of the Ukrainian people and find a solution to all the problems that have piled up," Putin said on Thursday.

Perhaps in light of the fact that many have accused the Kremlin of exerting pressure on Ukrainian President Viktor Yanukovych not to sign an association agreement with the European Union, Putin stressed Kyiv's right to self determination. Specifically, he said the Kremlin was putting no pressure on Ukraine to join a customs union with Russia.

"We are not imposing anything on anyone, but if our [Ukrainian] friends want joint work [on a customs union] we are ready for a continuation of that work at expert level," Putin said. "Our integration project is based on equal rights, on real economic interests."

Yanukovych travelled to Sochi for talks with Putin last Friday, but officials on both sides denied they had discussed the customs union, which currently includes Kazakhstan and Belarus. Anti-government protesters in Kyiv were angered by the talks, which came a week after Yanukovych balked at signing the EU accord.

In defense of traditional values

The Russian leader also used the speech to defend a law passed almost a year ago, which made it illegal to promote a gay or lesbian lifestyle. The law, which bans "propaganda of non-traditional relations" has been widely criticized in the West, and some gay rights activists have even called for a boycott of the Winter Olympics in Sochi in February.

"This destruction of traditional values from above not only entails negative consequences for society, but is also inherently anti-democratic because it is based on an abstract notion and runs counter to the will of the majority of people," he said.

In Thursday's speech, Putin also denied that Russia was or was seeking to become a superpower, saying that Moscow did not aspire to "global and regional hegemony" or to "teach anyone how to live."

This statement came in sharp contrast to a meeting with top army officers on Tuesday, in which he ordered them to build up Russia's military might in the Arctic region.

The president also used his state-of-the-union address to announce a package of initiatives aimed at cracking down on Russian companies that avoid paying tax by registering in foreign countries. He also said Russian-operated but foreign-registered companies would be excluded on bidding on government tenders.