At a ceremony in Moscow, Vladimir Putin has taken the oath of office of the Russian President and returns to the position he held for eight years before a four-year hiatus as prime minister. 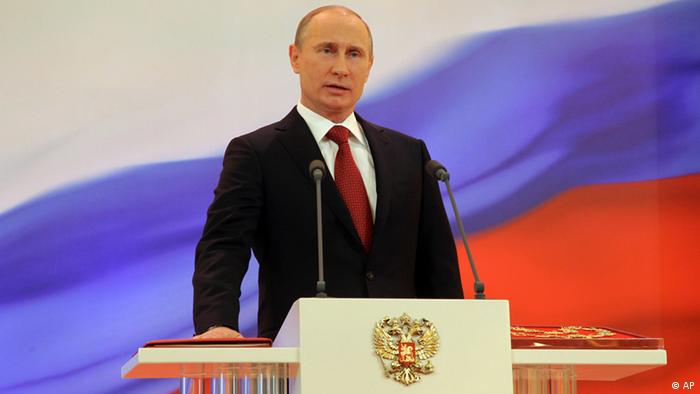 Vladimir Putin officially took over as Russian president on Monday, swearing an oath to protect the rights of Russian citizens a day after thousands of those citizens protested his impending inauguration. He succeeds Dmitri Medvedev as president.

Many Russians are angry that Putin, who previously served as president between 2000 and 2008, is returning to power after a four-year hiatus - of sorts - when he served as the country's prime minister. During that period, Russia's constitution was altered to permit Putin to serve a second two-term stint as president, and the length of the term was extended from four to six years. He comfortably won re-election in a presidential vote in March. Medvedev is likely to succeed Putin as prime minister later this week.

Sunday's protests turned violent when demonstrators attempted to deviate from the approved route of the rally and head to the Kremlin. Clashes with police ensued, with more than 400 people being arrested. There were reports of club-wielding police officers dragging demonstrators into police vehicles, some by their hair.

The rallies follow the initial wave of protests that gripped the country earlier in the year and were triggered by reportedly fraudulent national parliamentary elections and disquiet over Putin's re-election. But the turnout on Sunday was smaller than at the earlier protest marches that drew crowds estimated to be 100,000 or more.

Around 3,000 Russian officials attended the swearing-in ceremony in Moscow's St. Andrew Hall at the Kremlin.

"Today, we are entering a new stage of national development," Putin said at the ceremony. "We will have to decide tasks of a new level, a new quality and scale. The coming years will be decisive for Russia's fate for decades to come."

About 120 protesters were detained after trying to line the route Putin's motorcade took to the Kremlin.