Putin and Medvedev in role swap

Former Russian head of state Dmitry Medvedev has his old job as prime minister back in a contentious job swap with Putin. Meanwhile, opposition activists are showing resilience to a police crackdown on their activities. 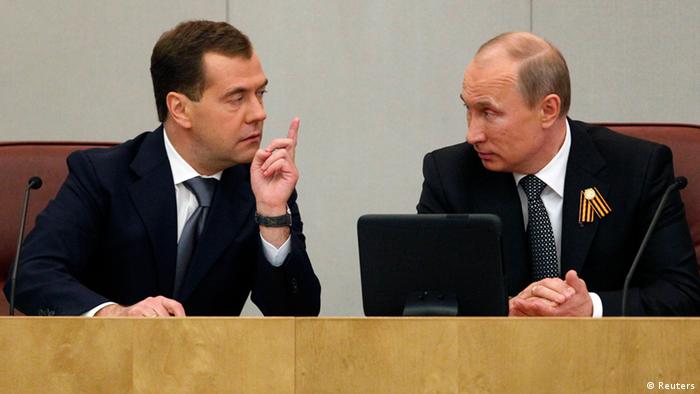 The lower house of Russia's parliament on Tuesday confirmed Dmitry Medvedev as prime minister by an overwhelming majority in a controversial job swap, after he was nominated for the position by freshly elected ally President Vladimir Putin.

Medvedev's nomination was supported by 299 deputies in the state Duma with 144 voting against the motion. Putin had earlier in the day asked the lower house of Russia's Parliament to confirm Dmitry Medvedev's entry into the position.

"I count on your support," Putin said while wrapping up his speech to the State Duma in which he described Medvedev, who has just concluded his four year term as President, as an experienced and dependable leader.

Putin and Medvedev carried out the exact same swap, albeit in reverse, in 2008, when Putin's first two-term limit as president had expired.

Meanwhile, Russian police cracked down on protesters to Putin's reelection Tuesday. Police detained at least 22 people after breaking up an anti-Putin demonstration by hundreds of opponents who had spent the night in a park close to the Kremlin, staging a sit-in. Two high-profile opposition leaders Alexei Navalny and Sergei Udaltsov were also detained but later released. They then rejoined their supporters and moved to protest in another square.

These arrests are further to the 700 people who had already been apprehended in the previous two days, many following a rally on Sunday against Putin's inauguration ceremony.

Putin's inauguration on Monday, marking his return to the presidency after serving between 2000 and 2008, has caused consternation amongst some Russians. Tens of thousands of the country's citizens took part in rallies against Putin's imminent return to the presidency in the run-up to the March election. Since Putin's comeback was confirmed, opposition numbers have weakened. But the protest movement is still proving its ability to cause a stir and seems intent on continuing its activities.

“The objective is to have people on the squares every day who are struggling for freedom, for change. It is a very simple tactic, and I think it has a chance to bring a successful result,” said Udaltsov.