A man claiming to be the leader of Nigeria's extremist Boko Haram group has denied agreeing to a truce with the government. He also said more than 200 abducted schoolgirls had been married off. 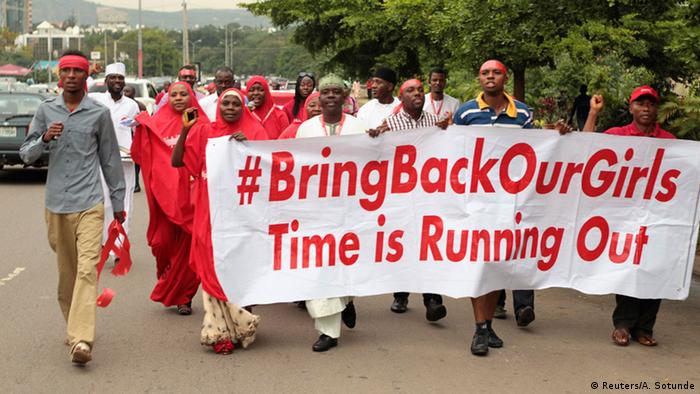 Nigeria's Islamic extremist group Boko Haram has denied in a new video that it had agreed any ceasefire with the government, and said more than 200 abducted schoolgirls had converted to Islam and been "married off."

In the video, received by the AFP and AP news agencies, a man claiming to be Boko Haram leader Abubakar Shekau also said the group was holding a German hostage seized in July in the northeastern city of Gombe.

The identity of the man speaking has not been confirmed, amid reports by Nigeria's military that it killed Shekau a year ago.

Nigeria said earlier this month that it had reached a deal with the militants on both a ceasefire to end a bloody five-year insurgency in the country's northeast, and on the release of the girls, kidnapped in the town of Chibok in April.

However, persistent violence in the region since the government announcement has cast doubt on any truce agreement having been struck. Last week, the extremists seized control of Mubi, a town of more than 200,000 people, while a triple bomb attack blamed on Boko Haram in the northern city of Gombe on Friday claimed at least eight lives.

The new announcement by Boko Haram, whose name can be translated to "Western education is sinful," further calls into question the ability of President Goodluck Jonathan's government to put an end to the insurgency and rescue the girls, whose kidnapping triggered an international campaign for their release.

AFP quoted Shekau as saying the girls were now in their "marital homes."

"Don't you know the over 200 Chibok schoolgirls have converted to Islam? They have now memorized two chapters of the Koran," he added.

Boko Haram's campaign to establish an Islamic state has killed thousands of people and driven hundreds of thousands more from their homes. Human Rights watch said in a report published this week that more than 500 women and girls have been kidnapped by the group since 2009, though some estimates put the number at more than double that.

Former hostages have testified that the militants often force girls and women into conversion and marriage, and that hundreds of people have been punished for offending against the extremists' version of strict Islamic Sharia law in the towns they control.

Nigeria's government has come under heavy criticism for having failed to put down the insurgency. It has blamed the violence following the alleged ceasefire on criminal networks that are not under the group's control.