Spaniards spurred on by social spending cuts and soaring unemployment have taken to the streets to demand political change. Protesters held demonstrations more than 60 cities across the country. 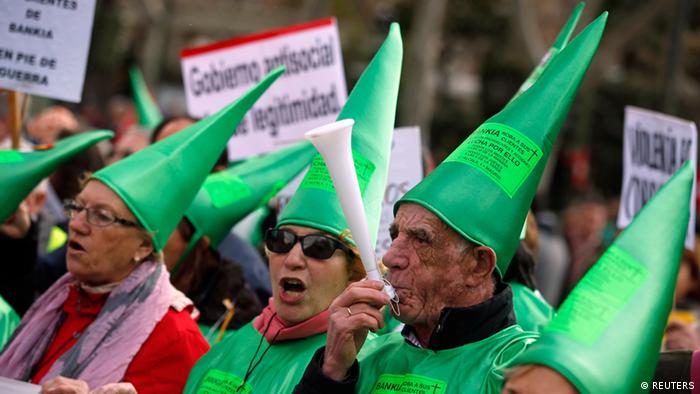 The nation's trade union confederations, CCOO and UGT, called for the demonstrations, alongside another 150 organizations and civil groups to protest against a series of government austerity measures.

In a statement, the UGT said Sunday's protests were called "against unemployment and for the renewal of democracy," according to the AFP news agency.

"Poverty in this country is rising at an alarming rate, we must say enough, right now," said Purificacion Garcia, secretary for equality for the Socialist Worker's Party PSOE, the DPA agency reported.

For unemployed immigrants to Spain, there's one last-resort "job" that sometimes pays more than minimum wage. It's dumpster diving, and it's particularly lucrative for former construction workers. (21.02.2013)

Sunday's actions were the latest in a string of protests against the austerity measures put in place by the conservative government of Prime Minister Mariano Rajoy. The prime minister insists that the measures are necessary in order to reduce Spain's budget deficit, and his government has been implementing them as part of an agreement reached with European authorities.

Despite the efforts, Spain's unemployment has soared to over 26 percent.

Protesters dismissed Rajoy's claims that the austerity measures, which they say are hitting public services such as schools and hospitals, will strengthen Spain's finances and improve the economy in the long run.

Spaniards, in general, just want "bread and a roof at a fair price," as signs waved by some of the protesters on Sunday suggested.

The protests came in the run up to Europe Union-wide rallies called by the European Trade Union Confederation, which are planned for March 14.