Thousands of anti-nuclear demonstrators were trying to obstruct a tightly guarded convoy of spent nuclear fuel on its way to a German storage facility. 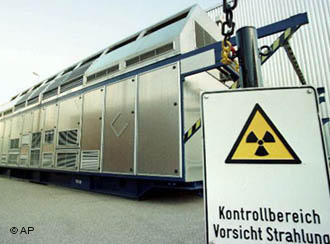 Near the warehouse in Gorleben in northern German, where many tons of radioactive waste are stored, more than 6,000 protesters thronged roads on Saturday, Nov. 8, just before a protest rally.

In the south of Germany, other demonstrators flocked to railway tracks expected to be used by the freight train convoy when it arrived from a French waste-reprocessing plant at La Hague on the Atlantic coast.

Two men and a woman chained themselves to the rail track at the small border town of Berg. A police spokesman said it would be difficult to cut them free. Protesters said the train was waiting at Lauterbourg on the French side of the border. 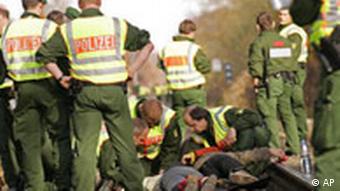 The anti-nuclear movement seeks the immediate closure of all nuclear power stations and believes that waste transport and storage is unsafe. Police said they expected protesters to try to block the convoy route through Germany.

Protests became violent in town of Wendland in Lower Saxony on Friday when some demonstrators threw bottles and firecrackers at the police and set fire to police barricades. They also reportedly smashed the windows of a police car and punctured its tires.

Police, however, don't expect the violence to continue.

"We're assuming that most of the local demonstrations will take place peacefully," a spokesman said.

Germany is studying whether to use an old saltmine near the warehouse in Gorleben as long-term storage for the waste.

Fuel from Germany's nuclear plants is routinely sent abroad for reprocessing. It is then returned to the Gorleben storage facility where German anti-nuclear protesters try to delay its arrival.

The convoy Saturday, carrying 17 tons of waste encapsulated in 100 tons of glass, was the 11th over the years to carry spent waste to the small town.

Some 16,000 German police were detailed to protect the convoy.

Germany's second-biggest power supplier plans to build up to five nuclear power plants outside of the country, its chairman said in a newspaper interview Wednesday. (22.10.2008)