Prosecutors launch investigation into Love Parade tragedy | News and current affairs from Germany and around the world | DW | 25.07.2010

German state prosecutors have opened an investigation into the stampede that killed 19 people and injured hundreds at the Love Parade music festival in Duisburg. But questions remain as to what caused the tragedy. 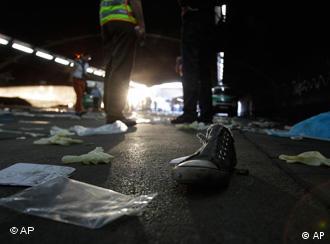 As the investigation attempts to shed light on what caused a deadly stampede at the Love Parade dance music festival in Duisburg on Saturday, city officials have faced tough questions over the tragedy.

Duisburg Deputy Police Chief Detlef von Schmeling told reporters on Sunday that two criminal reports were pending on the incident, but he could not confirm whether the organizers or emergency services would be implicated in the investigation.

Calls for an "intensive" and "uncompromising" investigation into the causes of the tragedy have come from as high up as Germany's Chancellor Angela Merkel and President Christian Wulff.

Victims from at least seven countries

In total, 19 people were killed when panic broke out in an over-crowded tunnel entrance to the festival. The circumstances that led to the tragedy remained unclear. People tried to escape the area around the tunnel and may have been trampled to death or fallen from a bridge they scaled to flee the crowd. 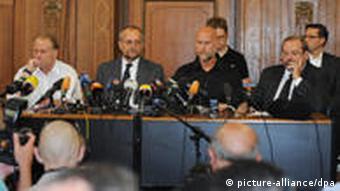 Von Schmeling said 16 victims who died at the scene were found on a nearby access ramp, indicating they were not killed in the tunnel. He added that prior to the stampede police had opened a second access ramp to ease crowd pressure around the tunnel. He also said that police were responsible for regulating the number of people inside the tunnel.

Sixteen victims have so far been identified, including two Spaniards, a Bosnian, a Dutchman, an Australian, an Italian and one person from China. Von Schmeling said all those who died were between 20 and 40 years of age.

It remains unclear exactly how many people were at the Love Parade, von Schmeling said, adding that he could not confirm reports that 1.4 million people were estimated to be in attendance. He said 105,000 people arrived by train between 9 a.m. and 2 p.m.

'Over for the Love Parade'

Love Parade organizer Rainer Schaller said the Love Parade would never be held again, and that every effort would be taken to find the cause of Saturday afternoon's tragic events.

"Words are not enough to describe the extent of the shock I feel," Schaller said.

Duisburg Mayor Adolf Sauerland was similarly rocked by the deadly stampede. "I can't dress up my grief with words," he said. "This misfortune is so gruesome that it can't be described with words."

The head of the Duisburg emergency task force, Wolfgang Rabe, said he has made available all documents pertaining to the incident to the Duisburg public prosecutor's office.

He said the Love Parade venue could accommodate some 300,000 people and was not full when the stampede occurred. Referring to the ongoing investigation, none of the officials at the press conference answered questions as to why the Love Parade's main entrance led through a tunnel. 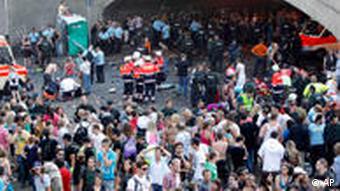 The crowd was overwhelmed in the tunnel

Cause of the tragedy

The blame-game has already begun with the police trade union in the state of North Rhine-Westphalia, where the incident occurred, throwing the first salvo. The union has been accusing the organizers of the Love Parade of careless preparation.

Those who lost their lives were victims "of the material interests of an organizer," said the police union's regional chairman, Wolfgang Orscheschek.

Witnesses to the stampede also criticized the event's organizers, with one man describing the proceedings as "organized chaos," while others reported that there was simply "no way out."

At least 19 trampled to death at Germany's Love Parade

At least 19 people were trampled to death on their way to the Love Parade techno music festival in Duisburg, Germany. The festival-goers were crushed in a tunnel on their way to festival grounds, according to police. (25.07.2010)