Preventing Tragedy in the Soccer Stadium | Germany| News and in-depth reporting from Berlin and beyond | DW | 14.09.2003

Preventing Tragedy in the Soccer Stadium

How fast can a packed soccer stadium be evacuated? German scientists are studying that question as they test panic research computer simulation technology in stadiums in time for World Cup 2006. 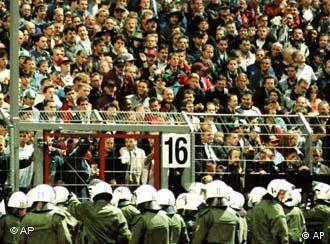 Soccer stadiums can quickly turn into death traps if mass panic breaks out.

67,000 fans cheered on Germany and Scotland during their cliffhanger qualifier for the 2004 European soccer Championships at the Westphalia stadium in Dortmund this week.

Unknown to them, 12 extra video cameras installed in different spots in the stadium tracked their every move – right from the time they arrived, entered the arena and took their seats to when they left to buy a beer in the break, buried their heads in their hands at a missed opportunity or cheered wildly at a goal and finally shuffled out ecstatic or crestfallen after the game.

It might sound like a Big Brother moment in this age of global terrorism, but in reality it was a scientific experiment. The brainchild of a team of German scientists researching panic behavior, the operation was aimed at predicting and preventing crowd hysteria that often leads to mob stampedes and tragedy. The video images were later fed into a computer which calculated how swiftly people could exit a stadium.

Dortmund a test run for researchers

"It was the biggest research operation of its kind. We even had cameras installed on the pitch below the stands," Michael Schreckenberg of the University Duisburg-Essen, and the brain behind the project, told Deutsche Welle. "We now have to process the images and ask ourselves questions like ‘what would happen if an exit were closed’?"

Schreckenberg explained that regular fans at the Westphalia stadium (photo) who had a season ticket for local soccer club Borussia Dortmund behaved differently than visiting supporters. "The local supporters are more sure of themselves, they know where to go, how to orient themselves in the stadium," he said. 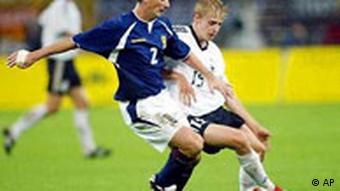 Germany's Tobias Rau, right, fights for the control of theball against Jackie McNamara of Scotland during a qualifying match between Germany and Scotland at the Westphalia stadium in Dortmund on Wednesday, Sept. 10, 2003. (

That’s the reason the Scotland-Germany game (photo) this week proved a crucial test run for the scientists in light of the World Cup, where thousands of visiting spectators, unacquainted with the German stadiums, are expected to arrive.

Physics rather than emotions rule here

The project, first started in 1999 and supported by the German Ministry for Research and Development, initially developed international evacuation standards for large passenger ships. It is now in use at railway stations, airports and hotels. With the upcoming World Cup in 2006, the scientists then approached the German Soccer Federation (DFB) to try the same standards on soccer stadiums.

The team uses a computer simulation model that reflects the conditions of a room from which virtual victims are trying to escape, but cannot use or see exits. The model relies on the laws of physics – distances, sizes and velocities rather than emotional states that usually dictate how crowds behave. The virtual spectators appear as particles that reflect an average person’s speed, size and desired distance from others.

Dirk Helbing, a professor at the Institute for Economics and Traffic at the Dresden University of Technology and one of the initiators of the digital panic research technology, underlined the intricacy of the research given that it is subject to wildly fluctuating and unpredictable behavior of people caught in panic situations.

"Emotions play a decisive role in how people behave in crowds," Helbing told Deutsche Welle. "One reacts completely differently in dangerous situations – hormones such as adrenaline are pumped up, a human being’s desire to flee is activated. Nervousness can also lead to a herd mentality where one blindly follows the others when one is unsure."

Helbing said the more nervous crowds get, the more unpredictably and irrationally they behave.

Schreckenberg added that the situation could take a sudden dangerous turn. "When people are standing too close together for longer than 15 seconds, they can get really uneasy and begin to jostle and become quite inconsiderate in the ensuing panic. In the worst case they can just die of suffocation or get crushed."

That point has been painfully driven home on several occasions. Since 1945,an estimated 1,000 people are believed to have died and 3,400 people injured in almost 30 serious soccer stadium accidents worldwide.

The worst tragedy in European soccer occurred during an FA Cup semi-final at the Hillsborough Stadium in Sheffield in 1989 when police opened a main gate to thousands of Liverpool fans outside the stadium, resulting in a sudden inflowing surge that crushed 96 people to death.

In the past couple of years, a spate of disasters have hit African football, the most recent being the one in Ghana in May 2001 when 126 supporters died after a stampede at the Accra Sports Stadium at the end of a local league game.

Helbing, who often works separately from Schreckenberg but whose simulation model is similar, says the technology also takes into account individual actions in a group.

"Mass panic can break out anywhere where crowds are hemmed in. Large crowds also usually make attractive targets for terrorists. Our model basically aims to optimize evacuation-capabilities of buildings and come up with pedestrian-friendly solutions to improve the efficiency of existing measures," Helbing said.

Schreckenberg added though German stadiums have to have security and evacuation measures that meet national safety standards, "one can do much more with our current technology nowadays. The computer simulation models can pinpoint weaknesses in the stadium architecture and predict where one can avoid disasters."

It still remains unclear whether the German Football Federation will extend the research begun in Dortmund to the 11 other venues marked for the World Cup 2006 and check their evacuation capabilities.

"If the research brings useful results, then we’re open for it," spokesman for the World Cup organizing committee, Jens Grittner recently told German daily Süddeutsche Zeitung. He said panic research couldn’t be compared to comprehensive security procedures, but said it was rather "a small building block in a security concept that still has to be worked out."