Press Review: Alarm Bells Ring Over Support for Far Right | Germany| News and in-depth reporting from Berlin and beyond | DW | 18.09.2006 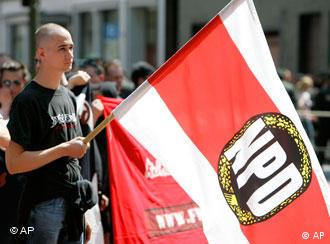 On Sunday, the far-right nationalist party gained 7.3 percent of the vote in the economically depressed northeastern state of Mecklenburg-Western Pomerania. The returns represented a significant increase compared to the state's previous election, in which they received less than one percent of the votes.

The gains also mean that the NPD, which caters to the frustrations and anti-foreigner sentiments of the unemployed in Germany's poorest state, now is represented in four German state legislatures. For the German press, the far-right victory is cause for sounding the alarm bells.

"In the interests of democracy, one should not underestimate the success of the NPD. What is nightmarish is the finding that half of the voters in the eastern part of Germany are unimpressed by democratic principles and freedoms that are valued in the West," proclaimed the Westdeutsche Allgemeine Zeitung, based in the industrial Ruhr Valley.

NPD party is reminiscent of the Nazis

The liberal Süddeutsche Zeitung likened the NPD to Adolf Hitler's National Socialists and warned that the neo-Nazi party is a greater threat than other far right parties in Europe, because "Germany is in the situation of a dry alcoholic, who is experiencing a relapse, which makes it problematic to wait until they simply self-destruct out of their own stupidity."

The Munich-based daily added that the NPD party is young, well-organized and maintains the façade of respectability by championing small causes, such as the protest against rising utility costs.

Another national newspaper, the Frankfurter Rundschau proclaimed, "Faced with this election result, we must be particularly concerned about the fact that over the last few years the NPD has managed to penetrate society, in particular in eastern Germany. (They) organize children's fetes, youth concerts, and distribute CDs outside schools."

According to Berlin's Tagesspiegel, "The NPD has achieved its goal, side by side with the Left Party and the Social Democrats, to establish themselves as a party for the small everyday man."

It added that NPD voters can no longer be dismissed as misguided, but essentially decent people after the "atmosphere of violence and intimidation" surrounding the party's election campaign in Berlin. But the newspaper made no excuses for such voters. "They know what they are doing."

Analysts predict the far-right NPD party will poll over five percent in one state election on Sunday and get into the legislature. A new, clean-cut image and widespread dissatisfaction appear to be a winning formula. (Sept. 16, 2006)

Voters dealt German Chancellor Angela Merkel's conservatives a bitter blow in regional elections which saw the neo-Nazis make a stunning breakthrough in her home state. The Social Democrats came out ahead in Berlin. (Sept. 18,2006)