Prabowo Subianto: Confronting the past

Campaigning on the promise of strong leadership, Prabowo Subianto wants to become Indonesia's next president. His biggest enemy, however, is not rival candidate Joko Widodo, but his own past, experts say. 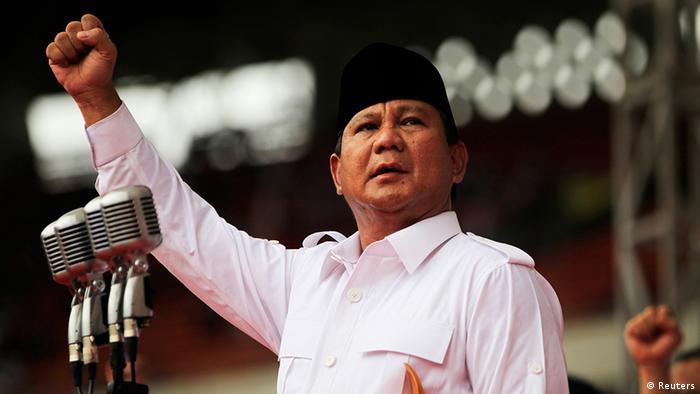 He was once one of the brightest stars in the Indonesian military: Prabowo Subianto was the youngest officer to ever lead a military operation against a separatist movement.

Prabowo later commanded Indonesia's elite military unit. A smart soldier and a strong leader with high-level connections, he was married to former President Mohamed Suharto's daughter. But his steep rise was followed by a sudden fall. His troops allegedly kidnapped and murdered several members of the democracy movement during the 1998 unrest. Not long after Suharto's fall from power, Prabowo was dismissed from the army.

Now, the soldier turned politician wants to fight his way back to the top, and is apparently using his connections to that end. His father was a renowned economics professor, and his younger brother, Hashim Djojohadikusumo, is a successful businessman who lives in London. According to Forbes Magazine, Djojohadikusumo is one of the richest Indonesians with a wealth of around 700 million USD. He is also financing the political activities of his older brother. 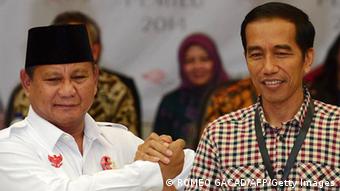 Joko Widodo (R), so far, is ahead of Prabowo in opinion polls

Apart from these parties, the presidential candidate has two powerful media magnates on his side: Aburizal Bakrie, who is the Golkar's party chief and also owns two national TV stations; and Hary Tanoesoedibjo, a successful businessman whose media company owns one newspaper and three television stations.

In Indonesia, the media has a big influence and many believe it even has the potential to determine the outcome of the elections. Opposition candidate, Joko Widodo, may still be leading the opinion polls, but the gap between him and Prabowo is getting smaller by the day with more than 40 percent of voters still undecided about their presidential preference.

Prabowo has promised to be a strong leader. He claims his government would be different from the current one, which has been ruling the Southeast Asian country for ten years now. The 62-year-old politician hopes to win those over who think incumbent president Susilo Bambang Yudhoyono is too weak.

Indonesia's biggest opposition party has narrowly won last month's legislative elections, but with a slender portion of votes. In a tight race, four parties won double-digit returns, but none took even 20 percent. (09.05.2014)

Early results suggest the opposition PDI-P is set to win the most votes in Indonesia's parliamentary elections. Analyst Sandra Hamid says the results reflect the voters' desire for change and graft-free politics. (09.04.2014)

"People want a strong leader. They believe Indonesia will have a better foreign policy under Prabowo," Gerindra's party chief, Suhardi, told DW. "Indonesia was pleasant and calm under Suharto. People need a strong and stable government, which can boost the country's economy."

But there is one thing which still haunts the former military man: his past.

"I was just an agent in those days," Prabowo recently said in an interview. He may have been involved in the kidnapping of activists, he says, but he had been forced to follow his superiors' orders.

Thirteen of these activists are still missing. Prabowo claims he does not know anything about them. "I was just one of the many generals."

Human rights activist, Mugiyanto Sipin, says that a person with a "dark past" like Prabowo's should not be the country's president. Mugiyanto is one of the activists who have been released. He says that during their detainment, the activists were beaten, threatened with weapons, and tortured.

"The voters don't know much about Prabowo, they only know him through his TV ads," Mugiyanto told DW. Together with other activists, Mugiyanto wants to remind people of Prabowo's past.