German sports car manufacturer Porsche announced a huge jump in profits for the financial year on Friday, Nov. 7. The outlook wasn't as rosy at Daimler AG and BMW. Both reported major slumps in October sales. 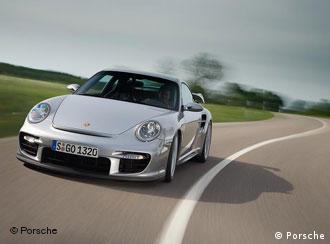 Porsche has had a good year

Porsche profit before taxes in the 12 months up to the end of July soared to 8.57 billion euros ($11.2 billion) from 5.85 billion euros the previous year, the company said in a statement.

The good performance was due mainly due to Porsche's involvement in Volkswagen, Europe's biggest automaker, in which it has a 42.6 percent stake that it plans to increase to 75 percent next year.

Porsche said it would increase its special dividend from 1.50 euros to 2 euros. It would also pay a dividend of 69 euro cents per ordinary share and 70 cents per preferred share.

But that doesn't mean sales of Porsche cars have been booming. The company reported only a 1.3 percent increase. Porsche warned again that 2009 will be a tough year that will likely mean a drop in sales and production.

Earlier, Daimler said sales plunged to 93,900 vehicles, an 18.1 per cent from October 2007 levels as the global economic slowdown began to bite. Sales of its core model Mercedes-Benz were down more than 20 percent to 80,250 vehicles, while those of the subcompact Smart were up 11.3 per cent to 11,300.

The company said the biggest declines were in Western Europe and the United States.

BMW said its sales were down 8.3 per cent in October to 113,000 cars, also compared to October 2007. In the first nine months of the year the company said it sold 1.22 million vehicles, slightly more than the same period in 2007.

Daimler and BMW have announced temporary closures of factories to save costs following a drop in orders triggered by the global economic downturn.

Though the actual car industry may be suffering a sharp decline in sales, the model car industry appears to be unaffected by the downturn. Collectors are anxiously awaiting new products. (02.11.2008)

The Frankfurt Stock Exchanged altered its rules Friday to prevent its three main indexes being distorted again by a crisis like this week's short squeeze on Volkswagen. (31.10.2008)