Pope urges Spain, Europe to open up to God

Following his arrival in Spain on Saturday, Pope Benedict XVI pleaded for the country and Europe to open itself to God, lamenting as a tragedy a belief on the continent that God is an enemy of freedom. 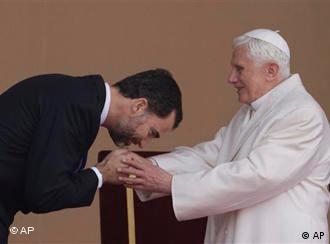 On the first day of his two-day trip to Spain, Pope Benedict XVI warned Saturday of "aggressive" anticlericalism in the country, and urged all of Europe to reconnect with its Christian roots.

Benedict lamented the belief in Europe that a Christian society was incongruous with freedom.

"Europe must open itself to God, must come to meet him without fear," he told 7,000 pilgrims from a vast white stage, dressed in a sweeping zigzag of purple flowers, at a giant open-air mass in Santiago de Compostela's Plaza Obradoiro.

"Tragically, above all in 19th century Europe, the conviction grew that God is somehow man's antagonist and an enemy of his freedom," said the pontiff. 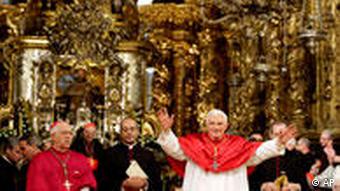 The pope conducted a mass in Santiago

"As a result, there was an attempt to obscure the true biblical faith in the God who sent into the world his son Jesus Christ, so that no one should perish but that all might have eternal life."

Earlier, while en route to Santiago, the 83-year-old pontiff told reporters that the anticlericalism seen now in Spain was reminiscent of the 1930s, when the church suffered under violence and persecution as the country fell into to civil war.

"Spain saw in the 1930s the birth of a strong and aggressive anticlericalism," he told reporters on the plane from Rome to Spain's holiest city, Santiago de Compostela, which is said to hold the remains of St James the Apostle.

"The clash between faith and modernity is happening again and it is very strong today," he said as he embarked on the two-day visit to bolster the Church against social change in Spain and Europe including easy divorce, abortion and gay marriage.

Once among Europe's most Catholic countries, Spanish society has witnessed rapid secularization in recent years. The image of the Church in Spain was also heavily damaged for its close association with the country's long-time dictator Francisco Franco.

In eight years the proportion of Spaniards who describe themselves as Roman Catholic has dropped to 73 percent from 80 percent and those attending weekly mass to 13 percent from 20 percent.

However, thousands still turned out to hail the arrival of Benedict in Santiago, showering confetti and chanting "Viva el Papa."

The pontiff will spend Saturday in Santiago de Compostela before heading to Barcelona in the evening and then on Sunday sanctifying Antoni Gaudi's unfinished masterpiece, the Sagrada Familia church.

As Pope Benedict XVI visits Santiago de Compostela on Saturday, he joins a long line of pilgrims who make their way to the third most holy place in the Roman Catholic world after Jerusalem and Rome. (06.11.2010)

At a ceremony at St. Peter's Square in Vatican City, Pope Benedict XVI canonized six saints, including Australia's first, Mary MacKillop. A Canadian and four Europeans were also given the honor. (17.10.2010)

Pope Benedict XVI has beatified Cardinal John Henry Newman at an open-air mass in Birmingham. He also marked the 70th anniversary of the Battle of Britain with a personal reflection on the "evil ideology" of Nazism. (19.09.2010)