After meeting with Pope Francis, Angela Merkel has called for stronger market regulation. On Thursday, the pope had appealed for financial reform, saying the economic crisis had worsened conditions for millions. 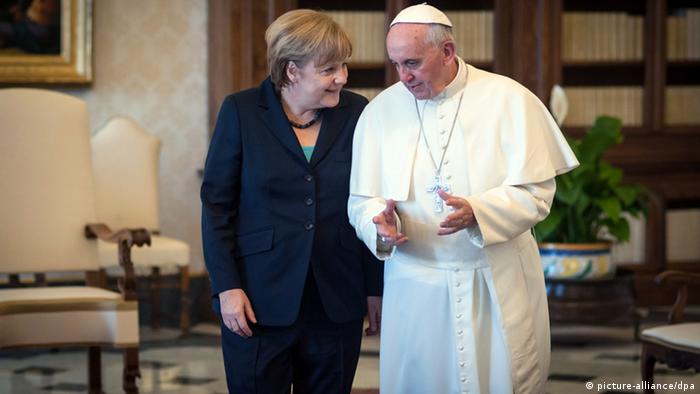 The German chancellor spoke with the pope privately in his library for 45 minutes, unusually long for a private papal audience. Afterward, she told reporters that the scandals and excesses criticized by Francis earlier in the week showed that regulatory measures had failed.

"Crises have blown up because the rules of the social market have not been observed," Merkel said. "We have made progress but we are nowhere near a point where we could say that the kind of derailment that leads to market crises could not happen again and so the issue will again play a central role at the G20 meeting this year," she added. "It is true that economies are there to serve people and that has by no means always been the case in recent years."

In his speech on Thursday, the pope had urged countries to protect their poorest citizens. He said a "cult of money" tyrannized the poor.

"Pope Francis made it clear that we need a strong, fair Europe, and I found the message very encouraging," said Merkel, the leader of Germany's Christian Democratic Union, which has strong Catholic support.