Pope ends Mideast tour with appeal for lasting peace | World | Breaking news and perspectives from around the globe | DW | 15.05.2009

Seeking to quell the controversies of the past week, Pope Benedict wrapped up his Mideast tour on Friday with a speech strongly denouncing the Holocaust and appealing for lasting peace between Palestinians and Israelis. 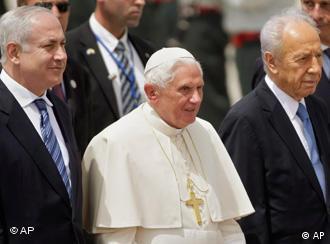 Speaking at Tel Aviv's Ben Gurion airport before flying to Rome, Pope Benedict XIV called for a peace that would end Israeli occupation of the West Bank and give the Palestinians their own homeland.

The pope pressed for an end to fighting between Israelis and Palestinians, calling for "no more bloodshed, no more fighting."

The message has been a consistent theme of the 82-year-old pontiff's speeches during his historic week-long visit to the Middle East.

The German-born pope, who has faced criticism from some Israeli leaders for what they said was a failure to sufficiently apologize for Nazi atrocities against Jews in World War II, also strongly condemned the Holocaust.

He vowed that the brutal extermination of Jews by the "godless" Nazi regime would never be forgotten or denied.

Israeli President Shimon Peres called the pope's visit a "profound demonstration of the enduring dialogue" between Christians and Jews.

Peres also made reference to the pope's statement about the Holocaust never being denied, saying it carried "substantive and special weight."

"It touched our hearts and minds," Peres said.

The pope said his pilgrimage to the Holy Land, his first, had made "powerful impressions" of hope and sadness on him.

He also called the fortified Israeli barrier in and around the West Bank "one of the saddest sights for me during my visit." 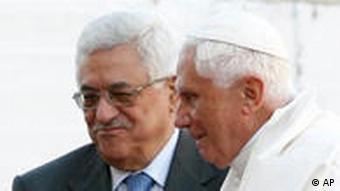 "As I passed alongside it, I prayed for a future in which the peoples of the Holy Land can live together in peace and harmony without the need for such instruments of security and separation," the pontiff said.

The pope's pilgrimage included a tour of a Palestinian refugee camp in the West Bank and meetings with both Israeli and Palestinian leaders.

The pontiff's many speeches during the tour have included several strong political statements, including his assertion of the rights of Palestinians to a sovereign homeland.

Earlier on Friday, the pope paid a visit to the Church of the Holy Sepulchre in Jerusalem, the site where Jesus Christ is believed to have been crucified.

The pontiff was escorted by clergymen in gold-embroidered black robes and red fezzes who beat their staffs on the cobblestones as he made his way by foot through the narrow alleyways of the walled Old City of Jerusalem to the church.

The pope kissed a rectangular stone on which it is believed Jesus' body was placed after crucifixion before entering the church to pray at what Christians believe is the empty tomb of Jesus.

The pope also met with leaders from the Greek Orthodox Church, saying that Christians and all residents of Jerusalem should have equal access to housing, employment and education.

The shrinking Christian minority in Israel and the Palestinian areas, down to about two percent of the population, is of concern to the Catholic Church.

But the pope's week-long trip to the Middle East, his first visit to the region as pontiff, has not been without controversy.

On Tuesday, a row erupted over the pope's membership as a teenager of the Hitler Youth, as he paid a historic visit to holy sites in Jerusalem.

Vatican spokesman Federico Lombardi said the pontiff had "never, never, never" belonged to the organization, but later changed his version, saying that he had been a member but his membership was compulsory. 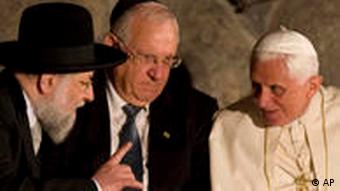 In his own 1997 memoirs, Pope Benedict had said he had been registered with the Hitler Youth while he was at a seminary.

The controversy followed comments by some Israeli leaders complaining that the pope did not go far enough in offering emotion in remarks he made on Monday at the Yad Vashem memorial to the Jewish dead of the Holocaust.

But in Friday's speech, the pope said the meeting with Holocaust survivors at Yad Vashem in Jerusalem was "one of the most solemn moments" of his pilgrimage.

"Those deeply moving encounters brought back memories of my visit three years ago to the death camp at Auschwitz, where so many Jews - mothers, fathers, husbands, wives, brothers, sisters, friends - were brutally exterminated under a godless regime," he said.

Pope calls for peace at Mass in Nazareth

Speaking in Nazareth, Pope Benedict XVI urged an audience of Christians, Jews and Muslims to put aside decades of conflict in the Holy Land and live in peace. (14.05.2009)

During a visit to Bethlehem, Pope Benedict XVI voiced support for Palestinian aspirations of an independent homeland and said he hoped the wall that Israel has erected in and around the West Bank would come down. (13.05.2009)

Pope Benedict XVI became the first pope to enter a politically-charged shrine in Jerusalem sacred to Jews and Muslims. The pope continues to face criticism on the second day of a week-long visit to the region. (12.05.2009)