Political earthquake in Brussels | Europe | News and current affairs from around the continent | DW | 26.05.2014

The success of extreme euroskeptic and anti-immigration parties in last week's European elections has rattled the political establishment in a number of EU states. But their gains at the polls are only part of the story. 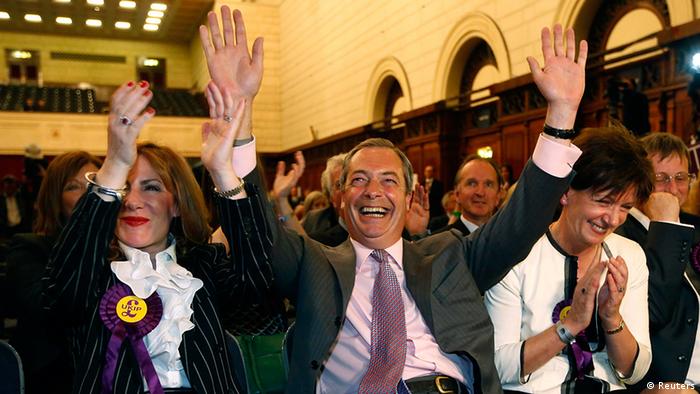 There is a degree of irony in parties whose raison d'etre is opposing the European Union expressing delight upon their election to the European Parliament.

Yet this was the situation across much of the bloc on Monday (26.05.2014) as it became clear that euroskeptic, nationalist and anti-immigration parties now constitute the third-largest political force in Europe.

Their success was not altogether unanticipated. Turnout for EU elections is generally low, and with euroskeptics more likely to go to the polls to register their dissatisfaction, their votes were expected to carry more weight in these elections than at a national level.

But the unprecedented scale of the outsider parties' success has stunned the political establishment. The big winners were France's National Front, the right-wing populist Danish People's Party and Britain's UK Independence Party (UKIP), all of whom topped the polls in their respective countries. 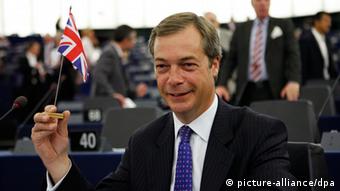 UKIP's leader Nigel Farage was just one of many who described the result as an "earthquake." UKIP has no representatives in the British parliament, yet in the European elections it led the field, garnering 27 percent of the vote. As Farage declared, "This is just about the most extraordinary result in British politics for over 100 years."

UKIP has sought to distance itself from persistent accusations of racism and xenophobia, and reposition itself as part of the political mainstream. Extensive media coverage of its campaign, though often unfavorable, helped get its message across. The party's outspoken anti-immigration platform attracted disaffected voters from across the social and political spectrum who complain that the main parties have failed to address the issue. They hold that immigration, particularly from Eastern Europe, is a threat to the British economy - and they hold the EU responsible.

'France for the French' 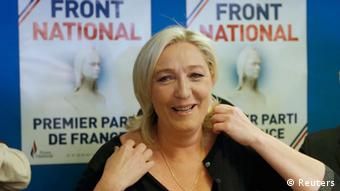 And he's not alone. Marine le Pen, the leader of the French National Front, wants to ditch the euro, reinstate inner-European border controls, and hold a referendum on France leaving the EU. Like Farage, her populist message is that European bureaucracy and immigration are responsible for high prices, unemployment and social problems. With 26 percent of the vote her party finished several points ahead of the conservative opposition, making it the first far-right party ever to win a French national election. Le Pen declared that the country had voted for rule "of the French, by the French, for the French."

The outgoing president of the European Parliament, Martin Schulz, was disheartened. "It is a bad day for the European Union when a party with such a racist, xenophobic and anti-Semitic program gets 24 to 25 percent of the vote in France," he said. "But these voters aren't extremists. They have lost trust; they have lost hope."

The French voters certainly made clear their poor opinion of President Francois Hollande's economic policy, pushing his Socialists down to a miserable 13.8 percent. Hollande's prime minister, Manuel Valls, took immediate action, promising to push through planned tax cuts for people on low incomes. He acknowledged that the French people were fed up with high taxation under the current government. 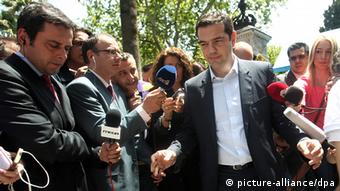 Elsewhere, too, people used the vote to protest against the prevailing economic policy - notably in Greece, where the radical left-wing opposition party Syriza was triumphant. Syriza won 26.6 percent of the vote, well ahead of the conservative New Democracy party of Prime Minister Antonis Samaras.

Samaras has made himself deeply unpopular by implementing EU austerity measures aimed at stabilizing the Greek economy. Over the past five years, in exchange for billion-euro bailouts, Greece has been required to make stringent cuts, which have had a heavy impact on the population.

Syriza encouraged voters to treat the European elections as a referendum on this policy. The party's leader, Alexis Tsipras, said the result showed the Greek coalition government had lost its legitimacy, and called for fresh elections. This is unlikely to happen, but the result increases pressure on Samaras to demonstrate that his current economic policy is actually benefiting the people.

Syriza is not the only Greek party to have harnessed popular discontent over the EU's austerity measures. At the other end of the political spectrum, the openly neo-Nazi party Golden Dawn claimed over nine percent of the vote, netting it three of Greece's seats in the European Parliament. 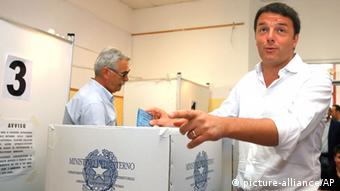 Italy, however, resisted the temptation to turn to the extremes. Here, the center-left party of Prime Minister Matteo Renzi won by a landslide of 40.8 percent, with the right-wing Northern League only scraping into parliament with just over 6 percent.

In Germany, too, Chancellor Angela Merkel's conservatives and their center-left coalition partners held their own. Merkel described the rise of right-wing populism across Europe as "remarkable and regrettable," and called for policies that could create jobs and improve competitiveness.

The European political landscape has undergone a seismic shift - yet it is unlikely to have an immediate impact on the day-to-day workings of the parliament. The centrist, pro-European bloc of conservatives and socialists still has an overall majority. And while the various nationalist parties have key interests in common, they also have, by their very nature, many differences. This will make it difficult for them to make common cause and form a coherent parliamentary opposition.

When the two main groups fail to agree, though, they will probably be forced to seek support among the euroskeptics, who together will hold around 140 of the parliament's 766 seats. And although they may not wield much power back home, their success in these elections has ensured that their policies are now firmly on the domestic radar.