The German government's plan to send 850 more troops to Afghanistan and shift the focus to training Afghan police to protect their countrymen and women has met with criticism from military and police groups. 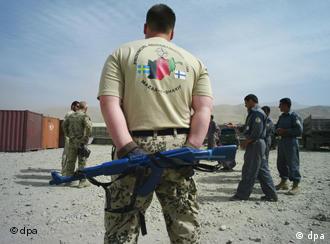 More police for Afghan trainees, but will it do the trick?

Troops would need several months of extra training and equipment, while much time has already been lost, Wilfried Stolze, a spokesman for Germany's soldiers association, told public broadcaster MDR. He warned that deploying the German personnel away from military bases and closer to civilians would increase the risk of insurgent attacks.

Despite the mandated task of civilian reconstruction over the past eight years "not a lot has really happened," Stolze said.

The adjustments did not go far enough either.

"We as the soldiers' association have been pointing out vehemently for some time that not all the legal circumstances for the soldiers have been clarified," he said, adding that "a lot still has to be done, because the soldiers feel totally uncertain."

Soldiers needed a better legal framework to underpin their decisions while manning checkpoints and during tense operations, he said, referring to last September's controversial NATO airstrike near Kunduz. 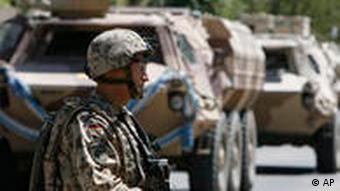 The attack, which was ordered by a German colonel, resulted in the deaths of up to 142 Afghans, including civilians and Taliban insurgents. A German parliamentary inquiry into the attack is underway.

Former Bundeswehr intelligence officer Marc Lindermann, who served two tours in Afghanistan, told parliamentary television channel Phoenix that though focusing on training Afghans and civilian projects might be workable, "it comes damn late." NATO had been present in Afghanistan since 2002, he pointed out.

He cited former defense minister Franz Josef Jung, who during a troop visit to Afghanistan in March 2009 had claimed that things were working out well. In reality, things hadn't been working for a long time in Afghanistan, Lindemann said.

Training paramilitaries is "not our job," Freiberg said, adding that since World War II Germany had made great efforts to establish its own civilian police service.

The international community has not achieved its goals in Afghanistan, according to Germany's Chancellor Angela Merkel. But the Afghanistan conference in London could set the decisive course for the future. (27.01.2010)

Merkel assures Karzai that troops will remain 'as long as necessary'

Chancellor Angela Merkel holds talks with Afghan President Harmid Karzai in Berlin after the announcement that Germany's troop contingent for Afghanistan will be increased by 850. (27.01.2010)