After a failed attempt at mediation, a camp of asylum seekers in Munich has been raided by authorities. More than 40 men and women had been on a hunger strike in the town center. 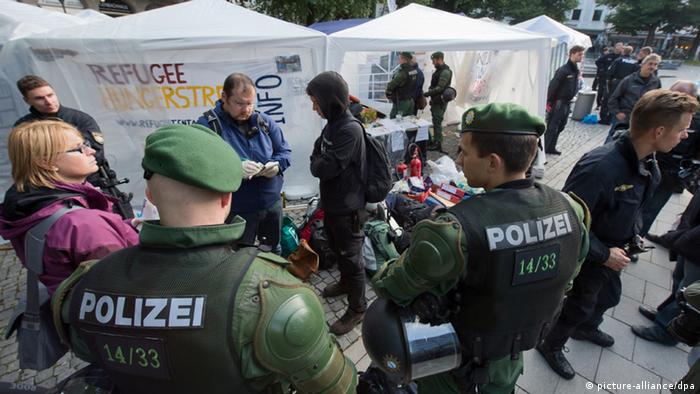 The asylum seekers, mostly from Africa and Asia, gave up food last week and then water on Tuesday, to underline their demand to be immediately recognized as asylum seekers.

Police began clearing out the camp on Sunday at 5 a.m, local time, after Saturday's efforts at mediation failed and the health of some hunger strikers deteriorated dramatically.

A city spokesman said that group had been split up and that the 44 protestors, including three children (who had not been on hunger strike), had been taken to hospitals for treatment.

The protesters from Iran, Afghanistan, Syria, Ethiopia, Pakistan and Ivory Coast had taken a tough stance. They had refused to speak to mediators, deferring to their spokesperson, Ashkan Khorasani.

He gave out slogans such as "Our bodies are our weapons" and "Either the demands of the protestors are met exactly, or there will be Bobby Sands and Holger Meins on the streets of Munich," in reference to a IRA member who starved himself to death in 1981 and a German RAF terrorist who had done the same in 1974.

"The authorities have shown that nothing was done to create trust," Ashkan Khorasani had said. He is a communist Iranian, who was granted political asylum in Germany several years ago and lives in Berlin.

He was arrested on Sunday for having prevented medical assistance to critically ill protestors.

In Germany, a decision on an asylum application can take up to two years. During that time the applicants are housed in refugee shelters, where several people share a room and several families from different nations live together in a confined space with little to do, as they are not entitled to seek paid work or leave the area.

"We have to learn our lesson from this protest," Bishop Heinrich Bedford-Strohm demanded on Sunday. "Politicians have to ensure that asylum seekers have humane living conditions and that their applications are dealt with fairly and swiftly."

Press comments are unanimous in their assessment that the police action to end the protest in Germany's wealthiest city, was also intended to put an end to a major embarrassment.