Public workers in Bangladesh staged a nationwide strike in protest against the anti-Islam film "Innocence of Muslims" on Sunday. Police were out in large numbers to ensure the strikes remained peaceful. 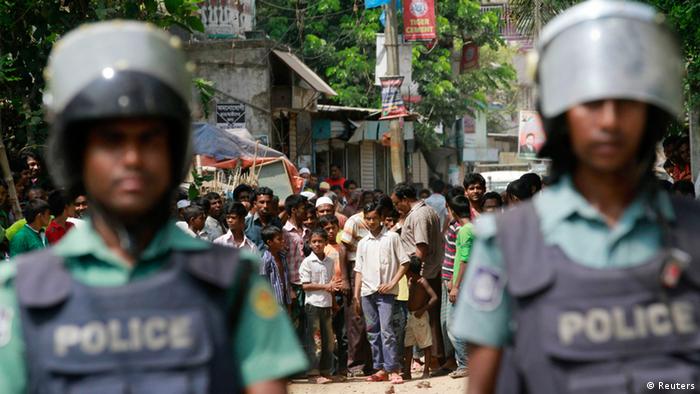 Shops, offices and schools were closed on Sunday across Bangladesh on what is usually a normal working day. The strikes in the mostly Muslim nation of more than 150 million people were called in response to the video from the US and caricatures from a French magazine, both of which mocked the Prophet Muhammad.

The strikes were initiated by several Islamic groups allied with the main opposition party.

In the capital, Dhaka, as many as 10,000 police and rapid response forces had been deployed to monitor the strikes. On Saturday, activists taking part in protests against the film and the caricatures clashed with police, which led to several dozens injuries. The police action against the protests was one of the reasons Sunday's general strike was called.

So far on Sunday, the protests have remained largely peaceful, although about 40 people were detained briefly for throwing objects at police.

The prime minister, Sheikh Hasina Wazed, has condemned "Innocence of Muslims," and the country recently blocked YouTube access to the film.

There have been more than 50 deaths across the Muslim world related to protests against the film, which started on September 11.

On Saturday, Pakistan's railway minister Ghulam Ahmad Bilour offered $100,000 (77,000 euros) to anyone who killed the American filmmaker responsible for the video. Other government officials, including many from Bilour's party, have distanced themselves from his remarks.