Two passenger trains have collided head-on near the town of Bad Aibling in the southern German state of Bavaria. Police reported that at least ten people have been killed and 108 injured. 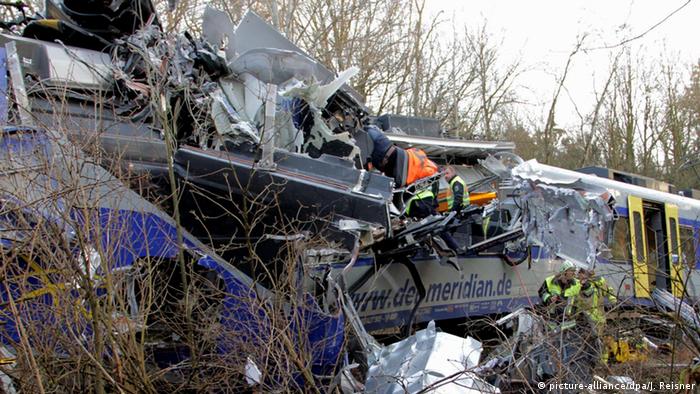 The accident occurred shortly after 6:48 a.m. local time (0548 UTC) on Tuesday, about 60 kilometers (37 miles) southeast of Munich. One train derailed in the head-on collision and several carriages overturned.

German Chancellor Angela Merkel said she was "dismayed and saddened" by the accident.

"My sympathy goes out especially to the families of the nine people who lost their lives," she said.

Speaking at a press conference in Bad Aibling, the German Minister of Transport and Digital Infrastructure, Alexander Dobrindt, said the front carriages of the trains were ripped in two after the vehicles collided while travelling at up to 100 kilometers per hour (62 mph).

"As the collision occurred on a bend, it's conceivable that the two train drivers didn't see each other beforehand," the CSU member said, adding that it was unclear whether the crash was the result of a technical or human error.

The minister said two of three black boxes, which will help to determine the cause of the accident, have already been found, adding that it would be "unhelpful to speculate" while the evidence was analyzed.

Bavarian Interior Minister Joachim Herrmann thanked emergency services for their efforts and praised neighboring Austria for their support in the rescue efforts.

"[The crash] is one of the biggest train accidents in recent German history, especially for us in Bavaria," he said.

Herrmann told reporters that according to the timetable, the two trains were due to pass each other in Kolbermoor.

"Why there was a deviation from the plan is unclear," he said.

The trains belonged to regional transport company Meridian, part of the Transdev group, while state-owned Deutsche Bahn is responsible for the track.

Deutsche Bahn chairman Rüdiger Grube said the rail company was "deeply upset" by the incident and offered the firm's thoughts to the relatives of those injured and killed.

Due to the difficult location of the crash site, boats and helicopters were used to transport many of the wounded across the Mangfall river before they were taken to hospital in ambulances.

"This is the biggest accident we have had in years in this region and we have many emergency doctors, ambulances and helicopters on the scene," police spokesperson Stefan Sonntag said.

"At the site of the collision, all you can see is debris. Rescue workers are climbing around and pulling people out," "Bayerischer Rundfunk" quoted a rescue worker as saying.

Within hours of the crash, Munich Blood Donation posted an urgent call for blood donors on its website, saying there was an "acute increased need for life-saving blood products."

"We are doing everything to help the commuters, their relatives and staff," he added.

Due to Bavaria's Fasching version of this week's carnival celebrations, the train was initially believed to be carrying fewer passengers than would normally be expected during commuter hours. Many children would also have usually been travelling to school, but are currently on holiday.

French investigators have determined a high-speed test train derailment in which 11 people were killed was caused by late braking and speeding around a bend. The train was testing a new line from Paris to Strasbourg. (19.11.2015)

Multiple deaths after train collides with truck in Bavaria

A passenger train has struck a heavy duty truck killing two people and seriously injuring four. Authorities say the vehicle may have been stuck on the railway tracks. (05.11.2015)

The Bundeswehr soldier has since been released, but an investigation against him is ongoing. He opposed rules requiring that soldiers and care workers be vaccinated.