Kurdish rebels have halted withdrawing fighters from Turkey. Though no deadline had existed, under a ceasefire agreed in March the withdrawal is key to a long-term peace plan. 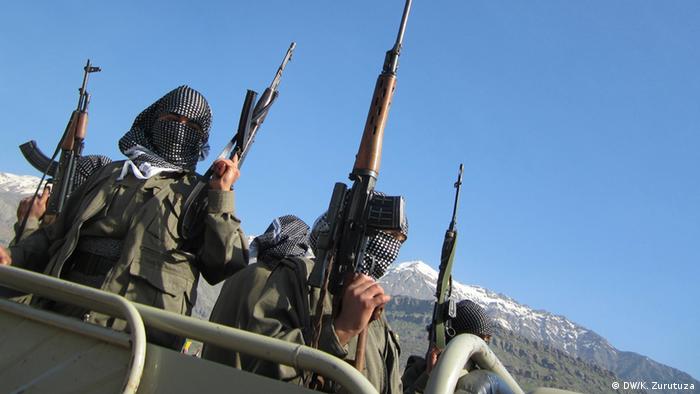 "The withdrawal of fighters has been stopped," the Kurdistan Workers' Party (PKK) - an armed movement listed as a terrorist organization by Turkey and several other countries - announced in a statement on Monday.

"The government - which gave no importance to the fact that the guerrillas had significantly withdrawn out of Turkey's border, which did not reciprocate, and which tried to use the process as a diversion and to enter local elections in a peaceful environment - is responsible for the situation," the rebels added.

However, the group did vow to respect the ceasefire with state forces, according to the Firat News Agency, which sympathizes with the rebels.

The PKK vowed to maintain the truce "to allow the Justice and Development Party government to begin initiatives supporting the plan" of Abdullah Ocalan, the imprisoned Kurdish leader who has negotiated the peace with the government since last year.

The German nurse and the PKK

DW travelled to the Qandil mountains in northern Iraq to meet Media, the German nurse who has spent the last 20 years helping and treating fighters and civilians in the PKK stronghold. (02.09.2013)

Under a plan to end the three-decade old insurgency, the PKK had begun withdrawing its fighters in May and settling them into safe havens in Iraq's autonomous Kurdistan region.

In the statement, the PKK also accused the government of failing to adopt a package of democratic reforms designed to reinforce the rights of the Kurdish minority in Turkey - an estimated 15 million people. In return for withdrawing its estimated 2,500 fighters in Turkey, the PKK has demanded amendments to the penal code and electoral laws as well as the right to education in the Kurdish language and a form of regional autonomy.

Turkish Prime Minister Recep Tayyip Erdogan had said last month that his government remained attached to the principle of peace with the PKK.

However, he said he would not offer a general amnesty for the rebels, including for Ocalan, who is serving a life sentence for separatism and treason since 1999. He also rejected any right to education in Kurdish.

Erdogan also questioned the extent of the PKK pullout, estimating that just 20 percent of its members had left Turkey for bases in Iraqi Kurdistan.