President Rodrigo Duterte has called Maria Lourdes Sereno an "enemy" for voting against government proposals. The opposition said the ouster of the nation's first woman chief justice left behind a "puppet Supreme Court." 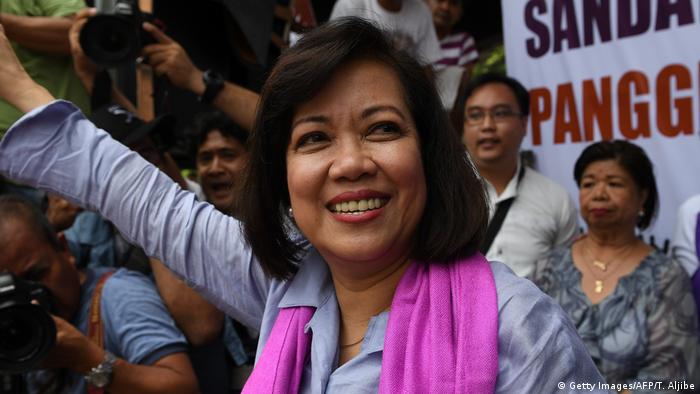 The Philippine Supreme Court voted on Friday to remove Chief Justice Maria Lourdes Sereno for allegedly failing to file statements of assets and liabilities as required by law.

Court spokesman Theodore Te said eight of 14 justices voted to expel Sereno from the 15-member tribunal. Sereno, the country's first woman chief justice, denies the allegation and did not participate in the vote.

Sereno has been at loggerheads with President Rodrigo Duterte, who has called her an "enemy" for voting against many government proposals.

She also has been speaking up for the respect of law and human rights, referring to Duterte's brutal crackdown on illegal drugs that has left thousands of suspects dead.

Sereno is the first chief justice to be removed by her peers. She is the second top judge to lose the position after her predecessor was impeached for non-disclosure of wealth. The Congress, controlled by Duterte's allies, was due to vote on an impeachment complaint against Sereno next week.

Sereno's position is vacant with immediate effect and the court has ordered the judicial and bar council to begin a new selection process, Te said.

Sereno's spokesman said she would appeal the decision.

Emerging from the Supreme Court after the decision, Sereno asked hundreds of protesting supporters to organize a movement to defend justice and accountability.

Read more: No drug-related extrajudicial killings in the Philippines?

Senator Risa Hontiveros called it "a direct stab to the heart of our Constitution", while her Akbayan party said the country was "a heartbeat away" from the death of its democracy.

"After having a lapdog Congress and a seriously wounded Senate, we now have a puppet Supreme Court," the party said in a statement.

Philippine President Rodrigo Duterte's profanities have become his calling card, with the leader having insulted the pope and the US president, among others. Now, he says, God has told him to clean up his language. (28.10.2016)