Pyeongchang has beaten bids from Munich and Annecy to be awarded hosting rights for the 2018 Winter Olympics. The Koreans had been favored to win the IOC vote after having lost bids for the 2010 and 2014 Games. 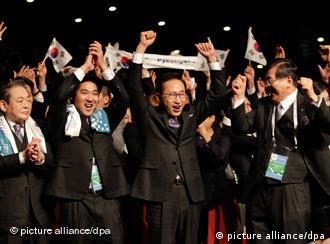 Korean President Lee Myung-bak had pledged to deliver the Games

It was third time lucky for Pyeongchang on Wednesday after the International Olympic Committee (IOC) awarded the South Korean city hosting rights for the 2018 Winter Olympics.

The Pyeongchang bid won 63 of the 95 IOC votes in the first round, beating rival bids from the southern German city of Munich, which won 25 votes, and Annecy in eastern France, which won seven.

"This is one of the happiest days of our country, our people and millions of youth dreaming of winter sport," said Pyeongchang bid chief Cho Yang-ho after the announcement by IOC President Jacques Rogge in Durban, South Africa.

South Korean President Lee Myung-bak said in Durban that Pyeongchang would make the world proud. "I guarantee you the full and unconditional support of the Korean government," he said. 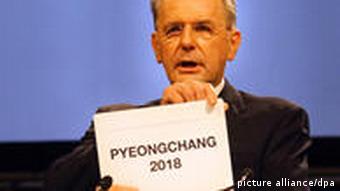 This was Pyeongchang's third consecutive bid

The IOC Bid Evaluation Commission noted the benefit of the Winter Games being held in Asia. "Overall, the commission believes the legacy from a 2018 Pyeongchang Games, building on existing legacies from previous Olympic Winter Games bids, would be significant to further develop winter sports in Asia," read the Pyeongchang bid appraisal.

The South Koreans had made their case for the 2018 Games on the basis that Asia had only previously hosted two Winter Olympics - both in Japan in 1972 and 1998 - and that winning the Games had been a national priority of the Korean government for the last decade.

Pyeongchang had thrown its hat in for the 2010 and 2014 Winter Olympics, but lost out to Vancouver, Canada, and Sochi, Russia, respectively.

Horst Seehofer, premier of the state of Bavaria, which supported the Munich bid, told German public television that he believed this argument had tipped the balance in Pyeongchang's favor.

"The South Koreans used this argument in a very professional and very skilled manner," Seehofer said. "They pointed out this fact over and over. And they asked the IOC members to take look at the map, and where the Olympic Games have been in the past. This seems to have had the desired effect." 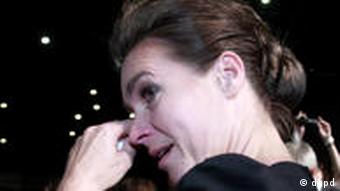 Ahead of the IOC vote, the South Koreans were the favorites to be awarded the Games, ahead of Munich, which pulled out all stops to support their bid. German President Christian Wulff, figure skating legend Katarina Witt and football star Franz Beckenbauer were recruited for the campaign.

President Wulff congratulated the South Koreans and said Munich could be proud for showing itself to be a likeable, open and sports-mad city. "We always knew it would be very hard," he said after the vote. "I offer my thanks to all those who have worked on our bid with so much enthusiasm."

Witt said, with tears in her eyes, that the loss was a tough pill to swallow, especially considering the quality of Munich's final presentation on vote day.

However, Deutsche Welle correspondent Jefferson Chase, who was in Munich for the announcement, said the Germans shouldn't be too disheartened by the outcome of this bid.

"The IOC has said to countries that apply for Games like this and don't get them, it doesn't mean no forever. Try it again, improve your bids and maybe it will work out next time around," Chase said.

"The Munich organizers have already registered the Munich 2022 Internet site. So that says to me, they'll probably think about going for it again in four years' time," he added.

A disappointed Bavarian premier refused to speculate on whether Munich's bid committee would regroup and take another run at the Winter Games.

"I don't think this is the time to be discussing making a further application. That's something that needs to be carefully considered," Seehofer said. "At the moment the disappointment is too strong. When we've come to grips with that, then we'll look towards the future."

Germany will have to wait a while to host its next Olympics. In the race for the 2018 games, Pyeongchang was the clear winner over Munich. DW sports editor Stefan Nestler says Germany's bid had limitations. (07.07.2011)

South Korea has worked hard on its bid for the 2018 Winter Olympics, doing its best to outpace Munich and Annecy, when the decision is announced on July 6. (05.07.2011)

Munich, which hosted the 1972 Summer Olympics, promises a unique and impressive show should it win its bid to host the 2018 Winter Olympics. The city learns its fate Wednesday, when the IOC decides the winner. (06.07.2011)