A Greek man who shot himself dead in front of the Greek parliament building in Athens on Wednesday has become the rallying point for protesters fed up with austerity measures implemented by the Greek government. 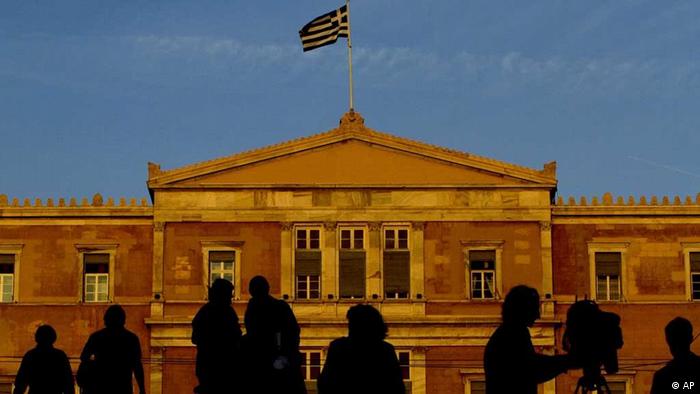 Protesters angry about a man's suicide that he blamed on government spending cuts took to the streets in Athens on Wednesday. Around 1,500 people turned out for the demonstration on Syntagma Square where the man died, some chanting "this was not suicide - it was murder."

Riot police fired tear gas and flash grenades when rocks and petrol bombs were thrown by a group of about a dozen people. Authorities reported no arrests or injuries.

According to the text of an apparent suicide note found with the 77-year-old retired pharmacist, the man felt he was unable to survive on his pension because of government spending cuts.

"I find no other solution than a dignified end before I start searching through the trash for food," the note read.

More protests for the man, whose name has not been released, are scheduled for Thursday.

Costas Lourantos, president of the regional pharmacists' union, said he had met the victim once several years ago.

"When dignified people like him are brought to this state, somebody must answer for it," Lourantos was quoted by Reuters as saying. "There is a moral instigator to this crime - which is the government that has brought people to such despair."

Prime Minister Lucas Papademos issued a statement on Wednesday regarding the man's death.

"It is tragic for one of our fellow citizens to end his life," he said. "In these difficult hours for our society we must all - the state and the citizens - support the people among us who are desperate."

Suicide rates have gone up in Greece since the country has begun to implement painful austerity measures aimed at reducing budget deficits to secure international bailouts that are keeping the country from going broke. Pensions are among the areas that have taken a hit because of the austerity measures.