Parliament sets up inquiry into failure to detect neo-Nazi killers | Germany| News and in-depth reporting from Berlin and beyond | DW | 26.01.2012

German lawmakers have established two parliamentary committees to look into security shortcomings that allowed a murderous neo-Nazi cell to evade detection for more than a decade. 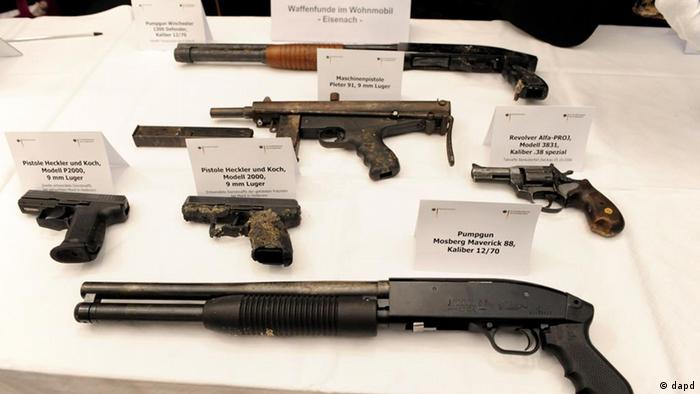 The neo-Nazi cell had all these guns - and nobody knew

Two parliamentary inquiries will investigate why 34 separate German police and intelligence agencies were unable to get solid leads on a murderous trio of neo-Nazis who killed 10 people before their group collapsed last year.

The Bundestag, Germany's lower house of parliament, on Thursday unanimously voted to establish one inquiry. The other was established in the state of Thuringia, the home state of the members of the group.

Peter Altmaier, parliamentary leader of the ruling Christian Democrats in the Bundestag, said the debate was largely marked by consensus. ""We were shocked that these people were able to create terror undetected and for so long," he said.

Lawmakers also recommended reforms for the police and intelligence agencies of the 16 states, as well as for their two national counterparts.

The vote for an inquiry in Thuringia was also unanimous. "The failure of the authorities began here," said Martina Renner, a Left Party state assemblywoman in Thuringia.

The alleged killing spree of the self-proclaimed National Socialist Underground was exposed last November when two of its three core members died in a shooting. They are believed to have killed nine immigrant shopkeepers between 2000 and 2006 and a policewoman in 2007. The third member is in police custody.

Germany's extensive domestic security apparatus came under intense criticism as it became clear that the neo-Nazis and some of their accomplices had been under surveillance at various times but were able to evade capture for so long, not least because the various intelligence agencies at state and federal level, failed to communicate adequately.

The scandal also led to criticism by opposition leaders of Chancellor Angela Merkel's government, which some say has neglected the fight against the far right and focused on other security threats instead..

Opinion: neo-Nazi investigation may do more harm than good

A parliamentary committee has been tasked with clearing up the failures in the investigation into a series of suspected neo-Nazi murders. But the fear is that it will simply serve party politics, says DW's Peter Stützle. (13.01.2012)