The idea that early humans survived on almost nothing but meat has been called into question by a new report looking at the role of plants in the hunter-gatherer diet. 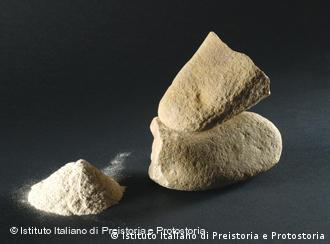 A study published on Monday in the scientific journal Proceedings of the National Academy of Sciences reports that traces of grains found on 30,000-year-old Paleolithic-era grinding stones are proof that early humans did not rely as heavily on meat as a source of energy and nutrition as previously thought.

The study also pushes back the earliest known date when humans were processing plant foods by approximately 10,000 years.

The team of researchers working on the project out of the Italian Institute of Prehistory and Early History in Florence, were alerted to the possibility of prehistoric food processing several years ago when they were studying stone tools found at a site in the Megello Valley.

Having established that the excavated implements had been used to splinter cattails, which once grew in abundance along creeks, they began to wonder what else the plant might have been used for. 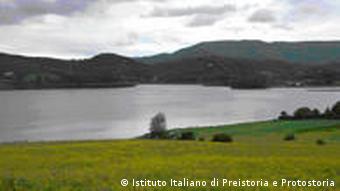 When the scientists subsequently came across the grinding tools, not only from the Italian site, but from southern Moravia in the Czech Republic and the Pokrovsky Valley in Russia as well, they made what Laura Longo, one of the researchers on the team, told Deutsche Welle was "an educated guess."

"We had been hoping the tools were for plant processing," she said. "So we did a microanalysis and realized that they had functional areas relating to grinding activity."

Other scientists who were not part of the study celebrated the results of this study.

"This is the time period when we have the first ceramics, the first textiles, we have systematic hunting of animals for furs," said Erik Trinkaus, a professor of anthropology at Washington University at St. Louis in the United States. "This is one more piece in the puzzle of the real fluorescence of upper paleolithic culture."

The next step was to analyze the surface, which they quickly realized was still coated in grains, and to begin the painstaking business of establishing which plants they came from. In order to do this, they had to build up a reference library of grain shapes, each of which is individual to plant variety.

They mainly came from cattail, a certain fern and a small grass," Longo said, adding that the logical conclusion to draw from that point was that early humans knew how to make a warm meal.

"Physiologically speaking carbohydrates need to be cooked in order to be metabolized by our digestive systems."

That clearly refutes the long-held theory that meat was the only important source of nutrition for the hunter-gatherer.

“We have finally demonstrated that a part of the diet was based on carbohydrates and plants in general," Longo added. "It had been assumed for a long time, but it had not been proved before now." 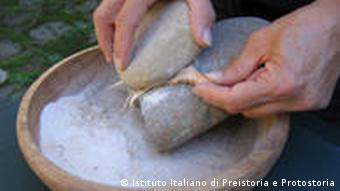 And that is not all the largely female research team has revealed. While the general evidence about the distribution of labor in nomadic people is that women stayed at the settlement caring for the children and keeping out of the manly business of hunting and gathering, Longo says her team's findings suggest that women played an active part in the collection and processing of food.

"Women had knowledge of what kind of food the nearby surroundings offered," Longo said, "So they were involved."

Likely as not in the cooking process as well. The Italian scientists say the ground grains would have been used for porridges and soups, which would have meant they could be mixed with meat for added nutritional value, but also for flatbreads.

"What we know from this is that they're grounding up plants and making flour -- we didn't find any bread," Trikaus added. "How much further [our human ancestors were] taking it, I don't think we really know. But not only is there evidence of this [in one location], but we're finding it across Europe."

Largo and her colleagues made a bread mixture from ground grains and water, which they cooked over the same kind of hot stone early man, or in this case, perhaps women, would have used.

"It wasn't very nice," she said. "But tastes have changed."

When the corpse of a 5,000-year-old human was uncovered nearly 20 years ago, archaeologists assumed the Iceman's death was anything but ceremonious. Researchers now think Oetzi may have received a proper Alpine burial. (26.08.2010)