Engineers are trying to learn how owls fly through the night without making a sound. Their wings could serve as models for quieter planes, turbines, or air-conditioning systems. 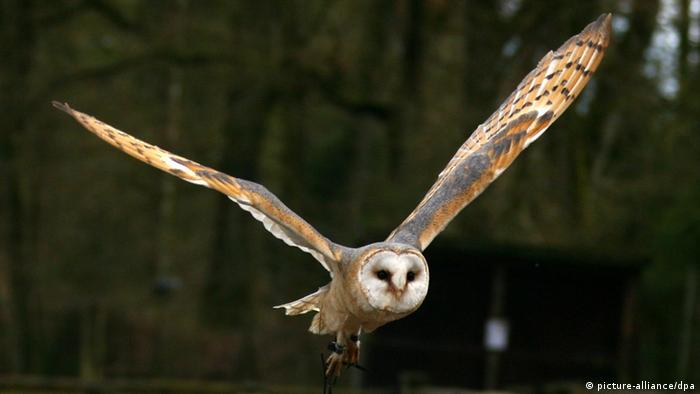 Bionics is the technical term for a field of research where scientists try to emulate nature. Owls are among the animals that have much to teach mankind. It is fascinating, say the scientists from the RWTH Aachen University, how the birds of prey fly without making any sound when they're hunting. 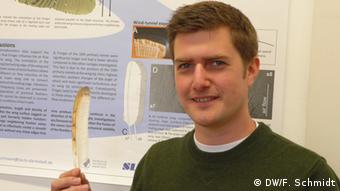 "Owls hunt at night, when visual information is very limited," explains biologist Thomas Bachmann. "That's why owls have specialized in detecting their prey with their ears. And that can only work when they fly quietly."

When analyzing the aerodynamics of an owl's flight, Bachmann noticed that barn owls weigh almost as much as pigeons, but their wings are considerably larger and more cupped. "This enables the bird to maximize uplift in fairly low speed," Bachmann says.

Pigeons have to flap their wings considerably more and can therefore be heard from far away. But owls, on the other hand, hardly produce any friction between their feathers – and consequently, they produce less sound. 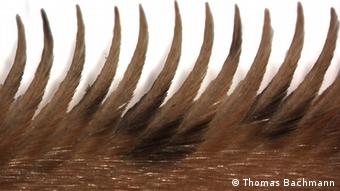 Small hooks on the wing's leading edge cause microturbulences

Owl feathers vary in the way they're designed, too: On their leading edge, the wings have fine hooks and the feathers' surface is very soft, and this combination produces micro turbulences on the wings' surface. 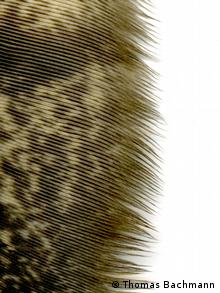 Fringes on the wing-tips make for a smoother air current

These microturbulences make sure that the air current stays on the owls' wings – in a similar way sharks' rough skin helps them glide through water without much friction.

Owl feathers also have fringes on their tips which serve two purposes. They reduce the sound because the feathers overlap more smoothly, and the air currents from both the wings' top and bottom side behind the wings meet more smoothly.

Storks as models for big jets

Of course owls' wing characteristics cannot simply be adapted for building planes – after all, owls only fly at a speed of ten to fifteen kilometers per hour when they're hunting – but engineers could apply the physical principles for fans, wind turbines, or other turbines.

Other birds' wings have already significantly influenced plane construction. Adding so-called winglets has meant that some commercial aircraft have less of a wake vortex – whirlwinds which can cause kilometers of heavy turbulence behind a jet plane, slowing planes down.

Engineers copied the winglets of vultures, eagles and storks. "You can see that these birds' feathers lift one after the other, and the winglets on the tip of every feather detach themselves, and this reduces the wing's resistance," explains Bachmann.

But owls can do more than fly without generating sound, adds the biologist. Their orientation happens almost entirely via their hearing system. The sounds are registered through the owl's face, and its asymmetrical ears – one points up, the other points down – help the bird recognize where the sound comes from. 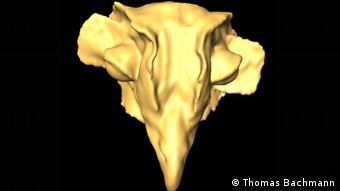 One ear points up, the other down

This principle could serve as a model for video conferences, enabling the camera to always point at whoever is talking. "If somebody starts talking somewhere else the camera could turn there automatically," says Aachen-based biologist Hermann Wagner who analyses the barn owl's sensory system.

Even if many conference participants talked at the same time, an owl-inspired steering system would still keep an overview. "Isolating sources is not easy, but barn owls are quite good at it. They know how to steer their focus," says Wagner, calling this the cocktail party effect: "At a cocktail party, where many people talk at the same time, we manage to listen to one person only. And barn owls are quite capable of doing the same."

Researcher Stanislav Gorb wonders what keeps a fly from falling off a pane of glass. His work could help robots climb up walls and clean facades. (11.02.2011)

Airplanes were developed in the US just over a century ago. But the dream of taking off and flying through the air is an ancient wish, according to an exhibition in Berlin. (09.03.2011)

In a DW interview, Peter Post, a German innovator explains the bionic grappler, a high-tech helper modeled after an elephant's trunk. (02.12.2010)