Oskar Lafontaine: Populist rebel of the left | News and current affairs from Germany and around the world | DW | 31.08.2009

A high-profile defector from the Social Democrats, Left party leader Oskar Lafontaine has always been a divisive character. He is aiming for the state premiership of his native Saarland in elections on Aug. 30. 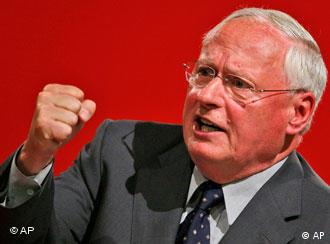 Lafontaine has had an emotive effect on German politics

Oskar Lafontaine has often been accused of using provocation to draw attention to the Left party. In an interview with news magazine Der Spiegel in May he again offered Social Democrat leader Frank-Walter Steinmeier an impossible coalition: "He could be chancellor tomorrow if he were to push through the minimum wage, restore the previous pension system, abolish [the unemployment benefit reforms introduced in 2005] and pull the German military out of Afghanistan." 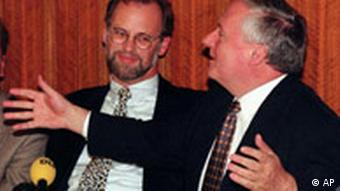 Rudolf Scharping (left) was beaten to the SPD leadership by his deputy Lafontaine at the 1995 party conference.

Since its inception in 2005, Lafontaine's tactic has been to attract voters disgruntled with centrist politics with bullish sound bites like this. His success with oppositional anti-war, anti-capitalist and occasionally anti-immigrant policies have dealt blows to the Social Democratic Party (SPD), of which he was once chairman and chancellor candidate, by tempting away much of its traditional working class base.

But his belligerence has not spared the right either. He has openly denounced George Bush and Tony Blair as terrorists, and in political magazine Cicero he said of the Christian Democratic Union, Germany’s main center-right party: "They made former Nazis into chancellors and presidents."

A party with attitude

By driving the Left party into a state of permanent opposition on a national level, he has won considerable grassroots support, creating an alliance of disenchanted SPD voters in the west and former communist voters in the east. While Lafontaine's uncompromising stance effectively precludes the Left party's assimilation in a coalition to rule Germany, the party has managed to gain a foothold in regional state governments in the former East.

A new opportunity for Lafontaine and his party arose this year, when the Christian Democrats' hold on the state premiership in Lafontaine's home state of Saarland began to weaken. Lafontaine is a very popular figure in a state he led as SPD premier from 1985 to 1998, and he still identifies strongly with its majority community of working class Roman Catholics.

In state elections held on Aug. 30, the party made dramatic gains in the western German state of Saarland, where it cracked the 20 percent barrier after drawing only 2.3 percent of the vote in 2004. If the Left party could take its first premiership in a western state, it would mark a significant success ahead of national elections on Sept. 27. On top of this, a new "red-red" coalition with the SPD in Saarland would further damage Steinmeier's slim chances of becoming chancellor. Once again, Lafontaine would have orchestrated a poisonous attack on his old party.

The 65-year-old Lafontaine has been a contentious figure throughout his political career. He gained national prominence in 1990, when he was the SPD's chancellor candidate against Helmut Kohl. Despite losing this election heavily, after fatally expressing reservations about German reunification in the face of public euphoria, Lafontaine made a spectacular comeback in 1995 when he became chairman of the SPD by dramatically defeating the incumbent, Rudolf Scharping, the losing chancellor candidate of 1994. His emotional speech seduced a party conference audience keen to reverse falling poll ratings and long years of defeat. 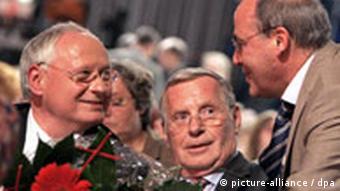 Despite fears that he would drag the SPD fatally to the left, Lafontaine masterminded the party's strategy of politically isolating Kohl in the final, exhausted legislature of his marathon reign. His reward came in 1998, when he was appointed finance minister in Gerhard Schroeder's first cabinet. This proved to be the zenith of his career.

His apostasy began when he resigned the ministry, along with his SPD chairmanship, in March 1999, after only 186 days in the cabinet. In his short tenure, Lafontaine had acquired the reputation of a party traditionalist, standing for the SPD's old allegiance to the working class, and blocking Schroeder's attempts at reforming Germany's tax and social security system.

In the years that followed, Lafontaine found himself increasingly alienated within the SPD, particularly after publishing his book "Das Herz schlaegt links" ("The Heart Beats on the Left") in October 1999. The book criticized the lack of team spirit in Schroeder's government and lamented the broken promises of the 1998 election campaign.

After many damaging statements that cost the SPD support in its working-class base, Lafontaine left the SPD, after nearly 40 years membership, in May 2005 ahead of the general election. Two weeks of dramatic media speculation followed, until Lafontaine emerged as the leading chancellor candidate in a new coalition of leftists that bound together the Electoral Alternative for Labor and Social Justice alliance (WASG) and the Party of Democratic Socialism (PDS), the successor to East Germany's ruling party, the SED.

His public role as a persistent irritant to the SPD has won him votes, but it has also drawn criticism, marked as it is with the bitterness of personal disappointment. The SPD has never forgiven him for what is seen as his betrayal, and their rancor is only exacerbated by the satisfaction Lafontaine seems to gain from their humiliation.

Lafontaine is unrepentant: "Unfortunately every leader of the SPD has promoted war and the dismantling of the welfare state," he told Cicero.

Recent reports suggest that Lafontaine may face a leadership contest in the Left party after the election, as a growing number of party members from the former east seek to break the hold that his dominant personality has on the party.

Few other parties in Germany are as divisive -- and no other party has changed its name so often. So what is the Left party? Where did it come from? And what are its policies? (05.01.2009)

Germany's Left Party has voted to send TV actor Peter Sodann up against more experienced political opponents as its candidate in the coming campaign for president. (15.10.2008)

The Social Democrats (SPD) are facing a growing challenge from Die Linke, a rival left-wing party, making it even more difficult to predict who will govern Germany after the 2009 general election. (28.08.2008)